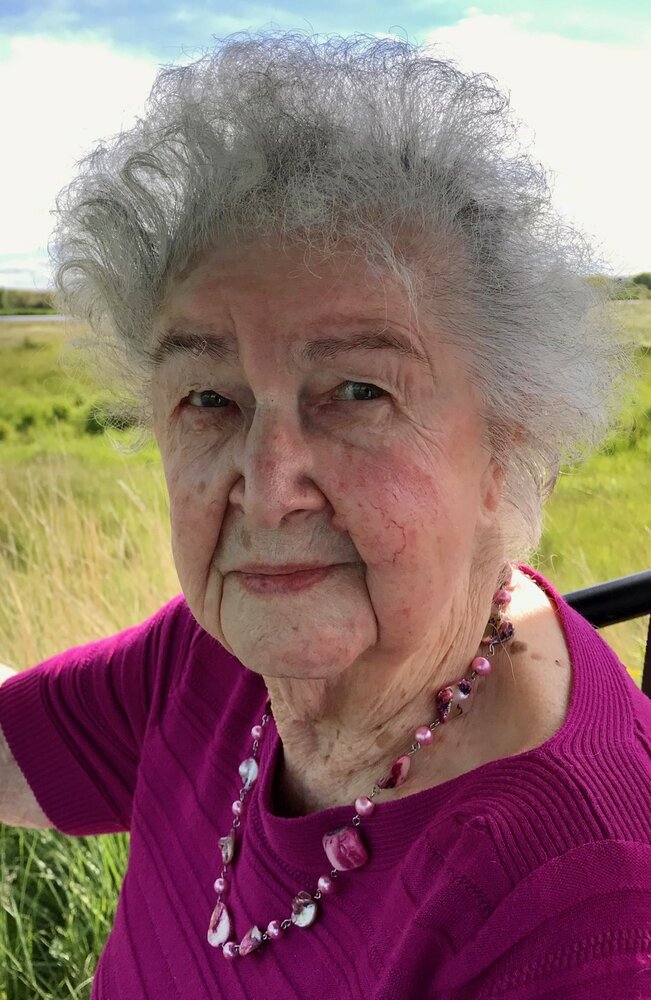 On December 26, 2022, Teresa Marguerite Jones Hust passed away peacefully at home in Weiser, Idaho. She was 5 months shy of her 100th birthday. Teresa was born May 26, 1923, in a little house just below the Mann Creek reservoir, to Charles and Lillian Jones. As a young child, she helped her mother in the kitchen and her father on their farm. Teresa hauled water on horseback out to the fields to give the workers a drink. She sewed sacks on the combine for grain. She started driving a model T when she was 10. Teresa attended several schools in the Mann Creek valley. She started the 1st grade at the Saling School and also attended Enterprise & Deer Creek School where she graduated from the 8th grade. She often spoke about riding her horse named Dobbin to school. The last 2 years of her schooling she lived in town with her grandparents, while going to the old high school. After her sophomore year she decided she didn’t need to finish high school to work in someone’s kitchen. At a young age she met Robert Hust who was also raised on Mann Creek. Their first date they went to see Gone with The Wind in the theater in Weiser. They dated for 2 years before he went off to war. While she waited for Robert to return from WWII, she worked in the winter in Vancouver, Washington pulling lumber on a planar chain & sorting apples in Titan. Her best friend Marjory (Robert’s younger sister) worked with her. She said it was hard work but they had a lot of fun together. She would return home on the train in the spring & summer to help her father farm. After World War II, Teresa married the love of her life Robert Hust on November 10, 1946. They moved to the McGregor place on Mann Creek. They had their first child, a son James in 1947. Later came Steve and Sonda. Teresa was a ranch wife & mother with an amazing amount of skill sets. She sewed clothes for her children, cooked many meals, tidied her home, baked bread & sourdough biscuits. Also cooking dinners for the haying & branding crews. She enjoyed planting flowers in the yard and said she had the prettiest lawn & flowers on Mann Creek. Robert & Teresa farmed, raised butcher chickens, pigs & milked cows. She made every dollar count & stretch. They lived in the Mann Creek valley most of their married life. After raising her children, her & Robert moved to Clayton, ID where Robert worked for a mining company. They lived in a 21ft travel trailer which Teresa bought & drove there herself. Her years living in Clayton were the most cherished time spent with Robert. In 1981 Robert was diagnosed with cancer & they moved back to Weiser. They lived on Crane Creek until Robert’s passing in 1982. They were married for 36 wonderful years. Following Robert’s passing Teresa moved to town. A few years later she met a special friend Walt Douglas. They spent 8 years traveling the West. And also enjoyed camping, fishing & hunting. In her later years, she played weekly card games with friends that included: cribbage, pinochle & bingo. Teresa was a member of the Busy Bee club & the Weiser Elks. She had many talents & hobbies. She really enjoyed decorating cakes for family & friend’s weddings & other special events. Other hobbies included: embroidering tablecloths, plastic canvas projects, sewing & making bead dolls. The hummingbirds brought her lots of joy throughout the summertime. She also loved to can jams and jellies, making fudge and peanut brittle at Christmas time. Cooking was her passion and enjoyment. She was known for making sourdough biscuits. Teresa loved watching tennis. She never missed any of the big 4 tennis tournaments. She'd look forward to these each year. She also loved to watch game shows, Gunsmoke, & old westerns. With compassion in her heart, she readily cared for people with failing health. Teresa was a live in caregiver around the treasure valley for over 30 years until she retired at 81. She had a natural desire to serve & care for others. She was strong, loving, funny, kind, adventurous, generous, tender, compassionate, hard-working, determined, creative, devoted, unconditionally loving, fun, wise, friendly and whitty. Teresa had many stories and experiences to share. She had a sharp memory always remembering specific dates & details all the way up to her death. She was a strong and courageous woman who could adapt herself to any new challenging circumstance. Teresa deeply loved her parents, siblings, children & grandchildren and stayed close to them throughout their lives. She lived a full life & she will be greatly missed by all those who had the privilege of knowing her. Teresa is survived by her children, Steve and Debbie Hust of Weiser, ID, and Sonda Young of Riggins, ID. She is also survived by her grandchildren, Rich Stiles (Lisa), Riggins, ID; Tanner Young, Riggins, ID; Klinton Hust (Noel), Kuna, ID, Bob Hust (Kathy), Boise ID; Travis Hust (Dawn), Nampa, ID; Chris Burton, Lewiston, ID; Korena Fiscus (Tim), Weiser, ID; Brandy Arnold (Lloyd), Montrose, CO; and Niki Ganz (Aaron), Filer, ID. 18 great-grandchildren and numerous nephews & nieces, & friends. Teresa was preceded in death by her parents, Charles & Lillian, her husband Robert, son James, grandson Tyler, brother Delwin, and sisters Teddy and Emma Jean. Graveside services will be held Tuesday, January 3, 2023 at 11 am, Mann Creek Cemetery

To send flowers to the family or plant a tree in memory of Teresa Hust, please visit Tribute Store