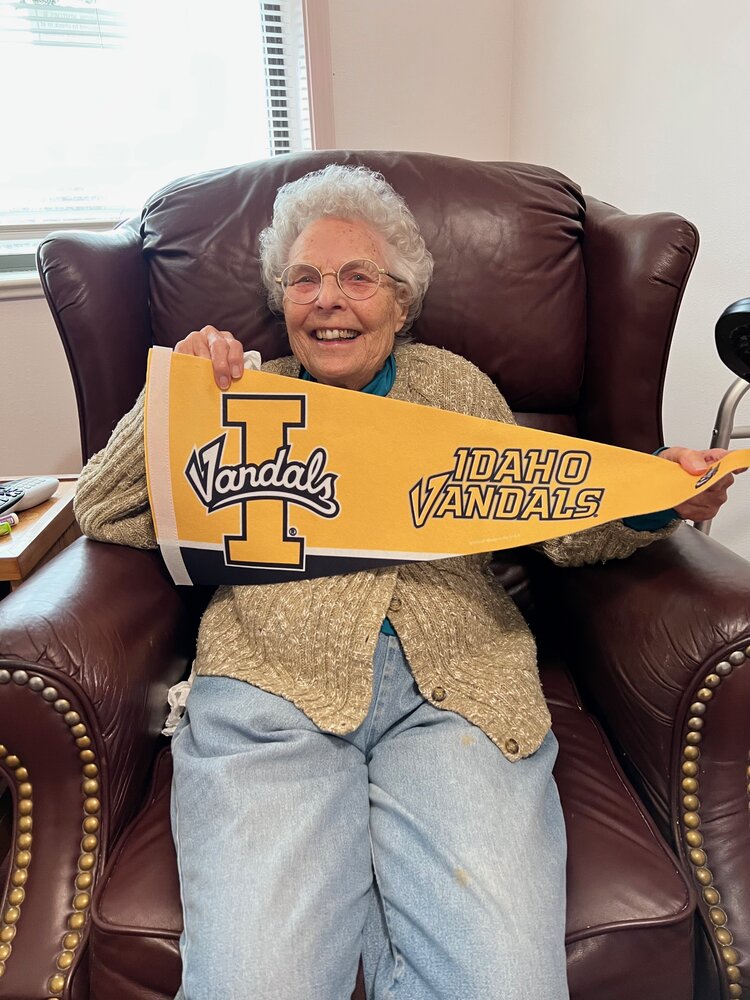 Irene was born to Oscar Daffer and Dorothy Naomi Daffer on a snowy night in Nebraska.  She weighed less than 5 lbs, and fit into a shoe box.  In those days, doctors made house calls, and she was born at her parents house.  Though tiny at birth, she flourished, and three years later welcomed a baby sister (Helen Arlene Daffer Gordon).  Parents Oscar and Dorothy were farmers, raising grain and hay.  In those days, farming was done by draft horses!

The family bought a farm in Kansas, just a few miles away.  Unfortunately, the Depression was upon them, and like many people, times were difficult.  A baby brother (Charles Daffer) was born in 1932.  A series of moves took place throughout Nebraska.  Finally, in 1936, the family headed to Idaho in hopes of a better future. Initially, Oscar found a job in Mesa, Idaho driving trucks for the Hogue Co. hauling apples for processing/sale.  Once the apple harvest was over, the family moved to Payette.  A better job was found in Weiser in 1941 and the family once again relocated.  Then WWII and the bombing of Pearl Harbor shaped their lives.  After graduation from Weiser High School, Irene worked to save money for college.  She entered the U of I in 1943. There she met Jack Tallent, her future husband.  He graduated as an Electrical Engineer in 1945, and was offered a job in New York City.  They married on July 16, 1945, and headed to NYC for their honeymoon.

Within a month, the atomic bomb was dropped on Hiroshima, and the war was quickly over.  Jack and Irene lived in New York until 1949.  They welcomed their first child, Thomas Henry, on Nov. 29, 1946.  After living in New York, the young family wanted to head west.  Jack took a position with Dallas Power and Light, and they moved to Texas.  There another child, a girl Dorothy Ann, was welcomed into the family.  In those years, air conditioning was essentially non-existent.  The family wanted to get back to Idaho.  Without even a job, the family moved to North Idaho.  As a professional engineer, Jack was able to secure a job position at the Bunker Hill Mining Company.  There the family stayed in Kellogg until Jack was able to secure a better job in Spokane (Kaiser Aluminum).

The family once again moved, allowing Irene to complete her degree at Eastern Washington University.  She began her teaching career, first with substituting, then with a full time contract.  Jack was asked to move to Tacoma with Kaiser, in 1958.  He stayed until Kaiser wanted him to relocate to Huntsville, Alabama.  Fortunately, Boeing was hiring!

Irene wanted to pursue a Master’s Degree in Library Science, so she took a sabbatical from teaching.  After receiving her degree, shObituary:  Dorothy Irenee continued as a school librarian until retiring.  A 1200 acre ranch was purchased just outside of Weiser as a retirement vocation.  Ranching is HARD work, so Jack and Irene sold the ranch and purchased a home in Riggins.  During the ranching years, Irene became involved with AAUW (American Association of University Women), always involved in expanding library services to rural Idaho.  She continued after moving to Riggins, and Jack became a professional engineer developing Highway 95 and 911 Service.

Both continued to provide their expertise when they moved back to Weiser in 2007,  Irene, with historical preservation, and Jack with engineering for the city of Weiser.

Services will be held Tuesday December 13, 2022 at 11:00 am at the Weiser Community Church, with burial to follow at the Hillcrest Cemetery.

To send flowers to the family or plant a tree in memory of Dorothy Tallent, please visit Tribute Store