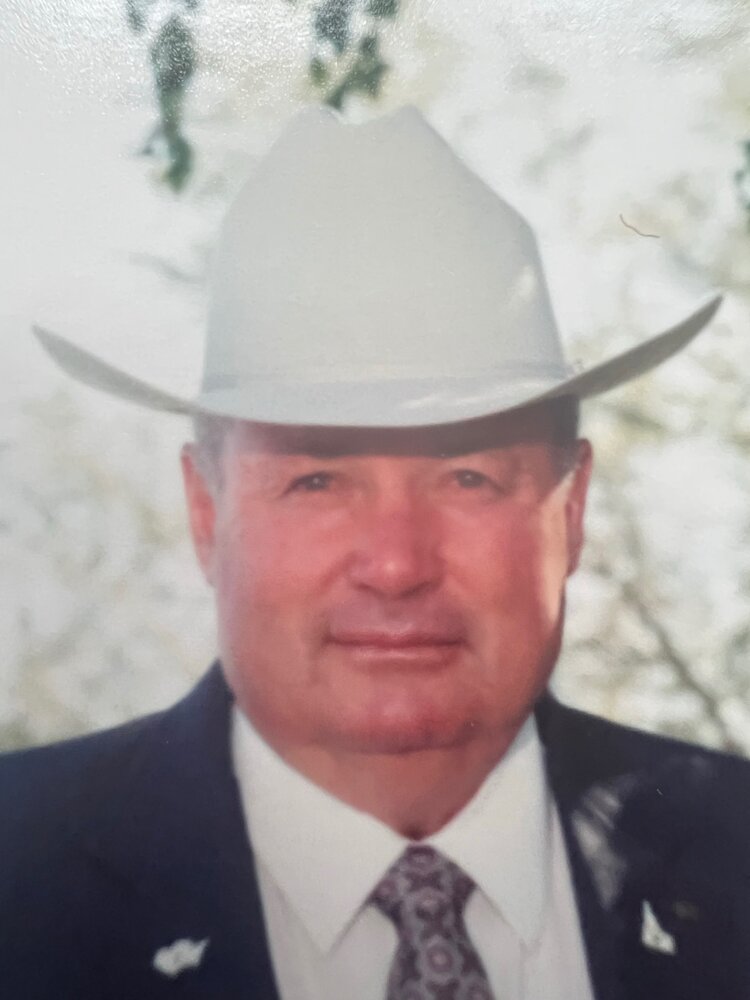 Weldon Branch went to be with the Lord on November 30, 2022. He passed away peacefully at his Midvale, Idaho ranch with family and friends by his side. He was 90. He lived a full life and was loved greatly by his family and friends. Weldon was a faithful husband, great dad, unbelievable grandpa/great grandpa and a successful rancher.

He was born March 24, 1932, in Weiser, Idaho, to William Milton Branch (Sublimity, OR) and Ellen Hilma (West) Branch (Glenwood Springs, CO). Weldon grew up on the family ranch 13 miles east of Midvale where his parents were second generation ranchers. He attended Sweet Home School, a one room schoolhouse on Crane Creek and later graduated from Midvale High School in 1949. Weldon went on to attend the University of Idaho where he played cornerback on the 1950 Vandal football team.

Weldon joined the US Air Force in 1951 and was stationed at Fairchild Air Force Base in Spokane, WA, where he served as a Senior Athletic Specialist. Among other things his job was to improve the physical condition of pilots on the base as well as train the military police in judo. He was a brown belt and performed exhibitions on base.

Weldon met Irene Legg as a freshman in High School and the romance began as he stole the first kiss on the ride home from the Washington County Fair. They would continue to have an affection for each other and ultimately married on September 12, 1953.

He spent his first 18 years of marriage on the Bonner place in Midvale where ranch and family life started. In 1969 he and Irene bought the Anderson Place on North Crane Creek and in 1971 moved the family to what is now known as the Branch Keyhole Ranch. Weldon assembled multiple ranches in Washington and Adams County, state leases, BLM leases and US Forest Service permits to create their ranch. Weldon and Irene were married and successfully ran the Branch Keyhole Ranch for 70 years.

Weldon served briefly in the Idaho State Legislature, served on the Boise District BLM Management Grazing Advisory Board, was President of Payette US Forest Service Grazing Advisory Committee, chaired the Public Lands Committee for the Idaho Cattlemen, was active in the Idaho Republican Party where he served as committeeman and delegate at the county and state level. He also served as President of the Indian Mountain Cattle and Horse Allotment for many years. He also served on the school board for the Midvale School District and even found time to manage his sons little league teams.

Services are planned for Saturday, December 17, 2022 at the Exhibit Hall in Cambridge, Idaho. There will be a viewing at the Exhibit Hall from Noon to 1pm. Services start at 1pm to be followed by a lunch and a graveside service at the Eastside Cemetery in Midvale, Idaho at 3:30pm. Everyone is welcome to come celebrate Weldon’s life.  In lieu of flowers, memorial donations can be made to the following organizations or the charity of your choice. Washington County Fair (In Memory of Weldon and Irene Branch) PO Box 405, Cambridge, ID 83610 or University of Idaho Extension, Washington County 4H (In memory of Weldon and Irene Branch), 116 W. Idaho Street, Weiser, ID 83672

Livestream of the service can be found at https://client.tribucast.com/tcid/284489208

To send flowers to the family or plant a tree in memory of Weldon Branch, please visit Tribute Store