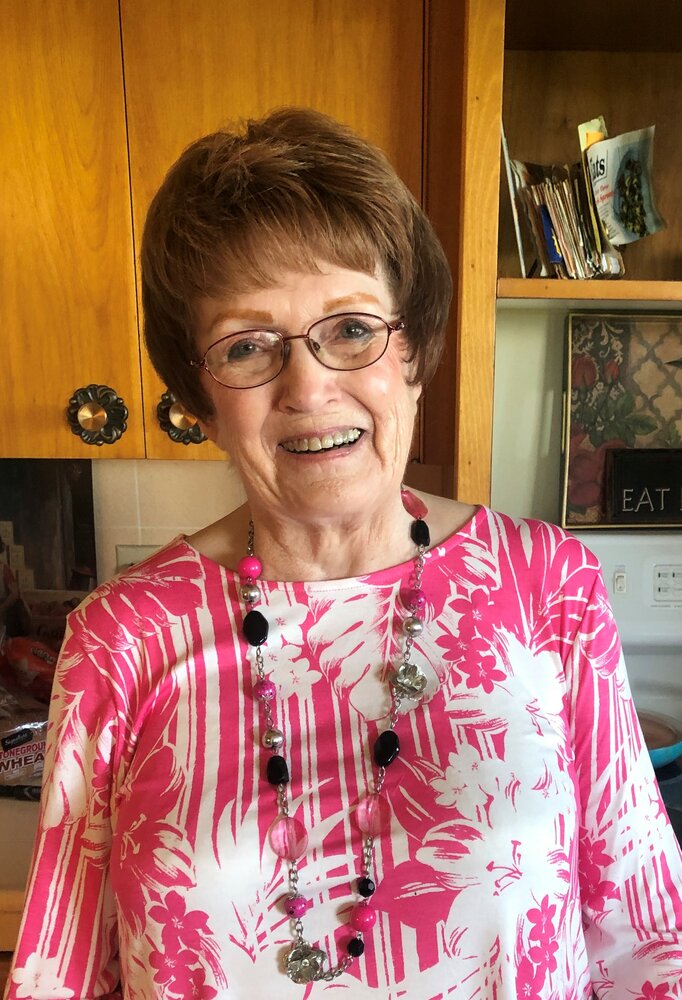 Autumn was Mary Payne’s favorite time of the year.  On November 4, 2022, when the trees were still yellow and red, she passed away of natural causes in Ontario, Oregon, surrounded by her loving family; she was 81.

Mary Margaret Long was born on November 27, 1940, in North Plains, Oregon, the oldest of seven children—two girls and five boys—in the family of Clyde and Ione Long.  When she was five, the family moved to Vale where she lived for the rest of her life.

When Mary was 15 ½, she saw a neighbor boy, Scottie Payne, who lived on a farm just down the road about a mile.  Scottie, five years older than Mary, was out in a field leaning on a shovel—and Mary was smitten.  They were married in October 1959 after she graduated from Vale High School, a marriage that lasted 63 years.  In high school, Scottie ran the mile and held a record in that distance for many years.  But Mary was always skeptical, “I don’t think he ran as fast as everybody says.  I caught him, didn’t I?”

For 55 years, Mary and Scottie ran a dairy, Vale View Farm, where they raised their four children:  Jeff, Julie, Kathy and Chris.  They showed their registered Guernsey cows at the Malheur County Fair, the Payette County Fair, the Idaho State Fair, and the National Guernsey Show, garnering innumerable prizes.  Over the years they added Jerseys to the herd, and even allowed in a few Holsteins.  Besides the herd of cows, the farm was home to a few horses, a couple of goats, a few rabbits, and more than a few dogs and cats.

Mary fed and raised the calves, worked with the kids on their 4-H dairy projects, and shuttled them to music and sports activities at school.  For many years she was active in the Malheur County Dairy Wives, at a time when dairying was a huge economic engine in the area. With that group, she organized the annual Dairy Princess contest, managed the Dairy Bar at the county fair, and promoted dairy products at every opportunity.

The Payne home was filled with music and books.  Mary loved to sing and had been blessed with a beautiful voice.  “Life without music is a mistake,” was a quote she repeated often.  The kids sang and learned to play multiple instruments, so the house sometimes sounded like a band rehearsal run wild.  Mary loved to read and she instilled that love in her children.  She considered books to be a necessity and the home library expanded continuously, embracing all kinds of books and magazines.

As a young child, Mary learned to sew on her mother’s treadle machine, and developed her skills in 4-H and high school home ec.  She became a remarkable seamstress and sewing remained a lifelong passion.  She led a 4-H sewing club for 8 years, sewed clothes for all of her children and grandchildren, and taught her daughters and a granddaughter to sew.  With impeccable detail, she sewed Halloween costumes, band and choir outfits, doll clothes, home décor items, and countless gifts for family and friends.

As the kids left the nest, Mary turned her energies towards helping her community.  She worked for Treasure Valley Community College as a community schools coordinator, mentoring students studying to complete a GED.  She worked as a teacher’s aide in the Vale school district, assisting students with disabilities in their classes and school activities.  The successes of the students that she worked with gave her great pride.  She worked for the Vale Chamber of Commerce, organizing the town’s annual 4th of July parade and celebration, and promoting the murals that adorn the buildings around town.

Mary was tough and resilient.  She twice defeated breast cancer, first at age 50 and a second time at age 60, enduring two mastectomies and, during the first battle, debilitating chemotherapy.  Diabetes annoyed her for 25 years, but she managed her blood sugar and medications on a daily basis to keep it from controlling her life and keeping her from doing the things she loved.

Mary never let a holiday pass unobserved.  She collected decorations for every holiday—New Years, Valentine’s Day, St. Patrick’s Day, Memorial Day, Independence Day, Labor Day, Halloween, Thanksgiving, Christmas and probably a few more that aren’t on the official calendar.  As soon as one holiday passed, out came the decorations for the next one and the house was continually decked out in anticipation of an upcoming celebration.  When she and Scottie moved into their assisted-living apartment, she was surprised to discover that they didn’t have decorations for some holidays, and she donated hers to ensure that the celebrations continued there.

In her later years, Mary created a series of scrapbooks commemorating the things closest to her heart:  her family, her grandchildren, and the farm.  Instead of leaving old photographs in boxes for her children and grandchildren to sort through and to try to identify the faces and places in them, she organized and mounted them in elegant scrapbooks, identifying the names, dates and locations in flawless Palmer-method handwriting.  She added all kinds of documents to bring alive the people and scenes in the photos: grade school report cards, county fair ribbons, a World War II ration book, an award for taking shorthand at 100 words per minute, a business card, poems and stories.  The scrapbooks, numbering almost two dozen, recreate Mary’s life in both the everyday and the extraordinary, in work and play, and in happiness and sorrow.  Most of all, they show the boundless love and caring that Mary brought to everyone

Mary was a long-time member of the Malheur Butte Baptist Church.  She knew many hymns by heart and loved to sing them.  As a child in church, she and her siblings would compete to see who could sing the most hymns without cracking open a hymnal to look at the words.  Even when her voice lost its strength as she grew older, she still sang the old hymns with great fervor.  Her church family, particularly Stan and Sharon Hawkins, provided support and fellowship that she cherished.

Mary is survived by her husband, Scottie, and their four children and their families:  Jeff Payne and John LaVeille; Julie Payne and Guy Nunez, and Julie’s children, Ayrton and Anne, and Anne’s daughter, Loretta; Kathy and Jay Beckman, and their children, Haylie and McKenna; Chris and Darci Payne, and their children, Boston, Brock and Brogan.  She is survived by one sister, Marva, and three brothers, Larry, Rod and CW, and numerous nieces, nephews and cousins.  She was preceded in death by her parents, two brothers, David and Richard, and a grandson, Brett.

Arrangments under the direction of Lienkaemper Funeral Chapel.

To send flowers to the family or plant a tree in memory of Mary Payne , please visit Tribute Store

Share Your Memory of
Mary
Upload Your Memory View All Memories
Be the first to upload a memory!
Share A Memory
Send Flowers
Plant a Tree