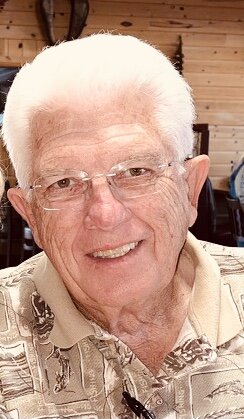 Obituary for Aylwin “Don” Evans Aylwin Don (Bud) Evans was born on September 4, 1945, in Weiser, Idaho, to Othniel Evans and Ida Lillian Anderson Evans. He was their second child, born four years after his brother, Arvid Gail Evans. Don grew up in Midvale, Idaho. His father was a farmer and one of the best mechanics in the valley. His mother worked as a clerk for Midvale’s local grocery store. In high school Don participated in football, basketball, and FFA. Don received his Barber License from Idaho State Barber College. His first barber job after graduation was in Orofino, Idaho. Don married his high school sweetheart, Nancy Williams, on March 20, 1965. They were married in the Midvale Baptist Church. Don and Nancy moved to Porterville, California, in 1966, where they started their family and raised their three children, Paul, Tami, and Shelly. Don worked for Southern California Edison, barbered part time, and was a part time beekeeper. Don retired from Southern California Edison after 15 years of service and went into steel fabrication and the construction industry. In 1993, Don and Nancy moved back to Idaho where they resided in Meridian. Don worked as Vice President of Cherry Lane Construction until his retirement. In 2007, Don built his final home in Midvale where he continued to barber in Weiser and Cambridge until his death. Don is survived by his wife Nancy, of Midvale, his son Paul Evans of Midvale, and his daughter Tami Felter of Boise. Don was preceded in death by his youngest daughter, Shelly Graesser. Don leaves behind seven grandchildren – Brent Quatacker of Porterville, Amber Matlock of Porterville, Megan and Jason Felter of Boise, Daisy and Gage Graesser, and Jackson Bondar of Temecula, California. Don also leaves behind 3 great grandchildren – Claytin Harper of Midvale and Jade and Sage Quatacker of Porterville

Arrangemens under the direction of Thomason Funeral Home.

To send flowers to the family or plant a tree in memory of Aylwin Evans, please visit Tribute Store