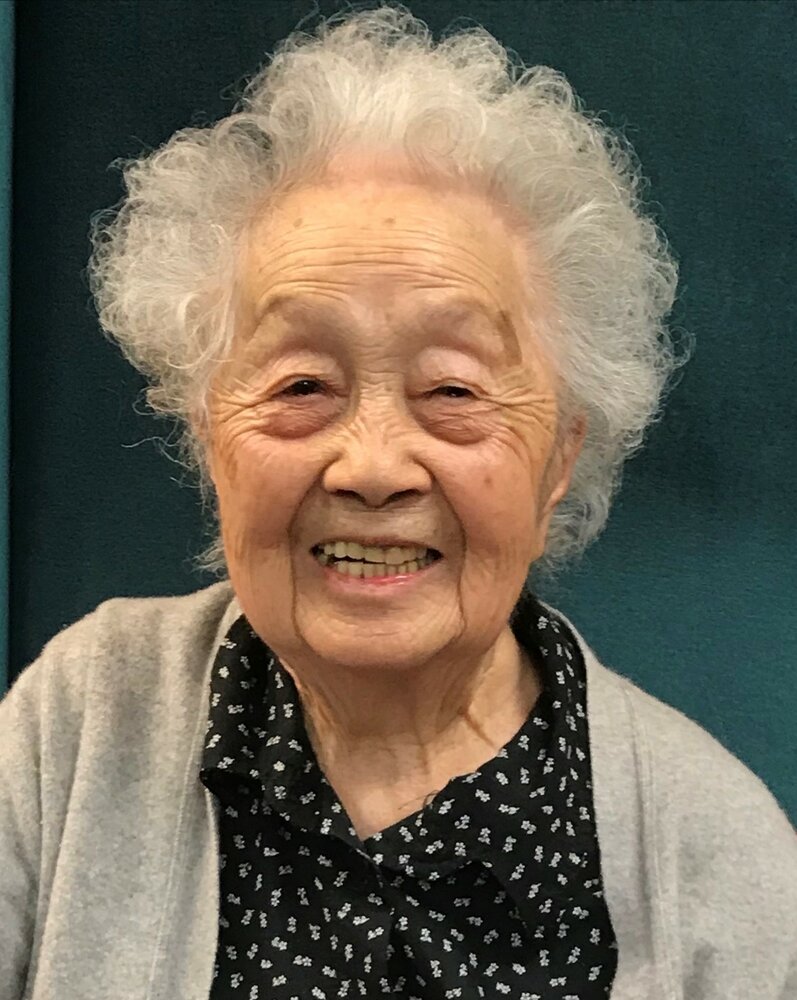 Mika Asai Hiuga, 99, passed away peacefully in her sleep on October 12, 2022 at Pioneer Place in Vale, Oregon.  Mika was born on August 28, 1923 in Hood River, Oregon.  She was the beloved daughter of Sagoro and Matsu Ito Asai and was the ﬁfth of eight children.  Mika grew up on a fruit orchard her parents had cleared and planted on the ﬂanks of Mt. Hood.   She attended local schools and graduated from Hood River High School in 1941.

After graduating high school Executive Order 9066 brought incarceration to Mika’s entire family.  Initially they were sent to the Pinedale Assembly Center in California in May 1942.    They were soon transferred to Tule Lake Internment Center in Northern California and later to Heart Mountain Internment Center in Wyoming.  Toward the end of her family’s residence in Heart Mountain, Mika was released to attend business school in Salt Lake City, Utah.

On 3/17/1945 Mika’s family was one of the ﬁrst to leave the camps to return to their orchard in Hood River.  It was a decision ﬁlled with some trepidation.  Their orchard farm had been preserved and taken care of by a kind neighbor against local public sentiment.  Mika’s three older brothers who were experienced at running the orchard did not return to Hood River, due to either being in the military or working elsewhere,  so Mika was next in line to be the head of the orchard operations.   She with her father, mother, younger brother and sister were left to run the orchard.  They were met with strong discrimination in their community even after the war ended which made even small tasks diﬃcult.   Together they managed to sustain the farm.

In November 1946, Mika married Harold Hiuga in Hood River after he returned from his military duties which included translation work for the Peace Agreement on the U.S.S. Missouri and the War Crimes Trial in Tokyo.       After Mika and Harold  were married they moved to the Treasure Valley to start their lives together.

They relocated to the Oregon Slope living and working on the Uriu Farm.  Mika was a loving mother to her son, Steve born in 1948 and daughter, Arleen, born in 1953.       "When her children were young she enjoyed her volunteer work as a youth advisor for her church and as a 4-H leader.

Mika enjoyed a 25 year career with Ore-Ida Foods in Ontario.  She started in the processing plant working a graveyard shift and ended her years as Assistant Director in the Personnel Oﬃce.  She met many good friends there before retiring in 1988.

After retirement Mika devoted her time to volunteer work.     She tutored students through Treasure Valley Community College in language studies teaching foreign students English and GED studies helping adults obtain degrees, driver's licenses, and improve their lives.    Mika also enjoyed taking a variety of classes at TVCC.  She had a deep love of learning and truly enjoyed teaching others.

Mika volunteered at the Four Rivers Cultural Center for 17 years.  She worked in ticket sales, served as a docent, and served on the Board of Directors.   She enjoyed giving tours of the museum.  She had the opportunity through the center to present her WWII incarceration experiences so others could learn about this event.  She addressed students in classrooms as well as speaking to many adult organizations.    She wanted to ensure “Nidoto Nai Yoni” translated to mean “Let it Not Happen Again” through helping others understand what happened during those years.

Mika also volunteered to deliver Meals on Wheels and served lunches at the local Senior Center.  She later enjoyed dining with her friends at the center.

Mika was an active member of the Ontario Community Church.  She was also a member of the local Japanese American Citizens League.

Mika enjoyed traveling and visited many US states including Hawaii and Alaska as well as  China, Japan, Great Britain, France, Germany, Belgium, Italy, Austria, Canada, Costa Rica and Mexico.  She loved to play Bridge, Shanghai, and Bingo and participated in a Bowling League.  Mika played piano and organ for her church, played bells with a group, and enjoyed attending Community Concerts. She enjoyed reading, word puzzles, walking, water aerobics, and playing tennis.

She was preceded in death by her husband, parents, one sister, and ﬁve brothers.   Her death on October 12 was on the exact same day as her husband, Harold, thirty-four years later.  We trust they are together today.

She is survived by son Stephen Hiuga, MD, and his wife Elaine, from Sacramento, CA and daughter Arleen Hiuga Musgrove, and her husband Richard, from Redmond, WA.  Other survivors include grandson Thomas Hiuga, his wife Trish, and son Neal from Sacramento, granddaughter Kimberlee Hiuga and ﬁancé Cale Klemme from Santa Cruz, granddaughter Kiera Long and husband Conor from Bellingham, WA, and sister Mitzi Loftus from Ashland Oregon.  She is also survived by many loving nieces and nephews.

Mika wished to thank the Uriu family and the Murata family for their kindness during her lifetime.    She also wished to thank Barbara Little and Sherri Stabler for years of quality care and devotion.  Thank you to her caregivers at Pioneer Place, Vale for the kindness shown her during her latter months.

A Celebration of Life will be held on Saturday, November 5 at 1:00 at the Ontario Community Church followed by a luncheon at Four Rivers Cultural Center.   Interment will be at Evergreen Cemetary at 10:00 a.m. on November 7.   Arrangements are under the direction of Lienkaemper Funeral Chapel, Ontario.

To send flowers to the family or plant a tree in memory of Mika Hiuga, please visit Tribute Store

Share Your Memory of
Mika
Upload Your Memory View All Memories
Be the first to upload a memory!
Share A Memory
Send Flowers
Plant a Tree