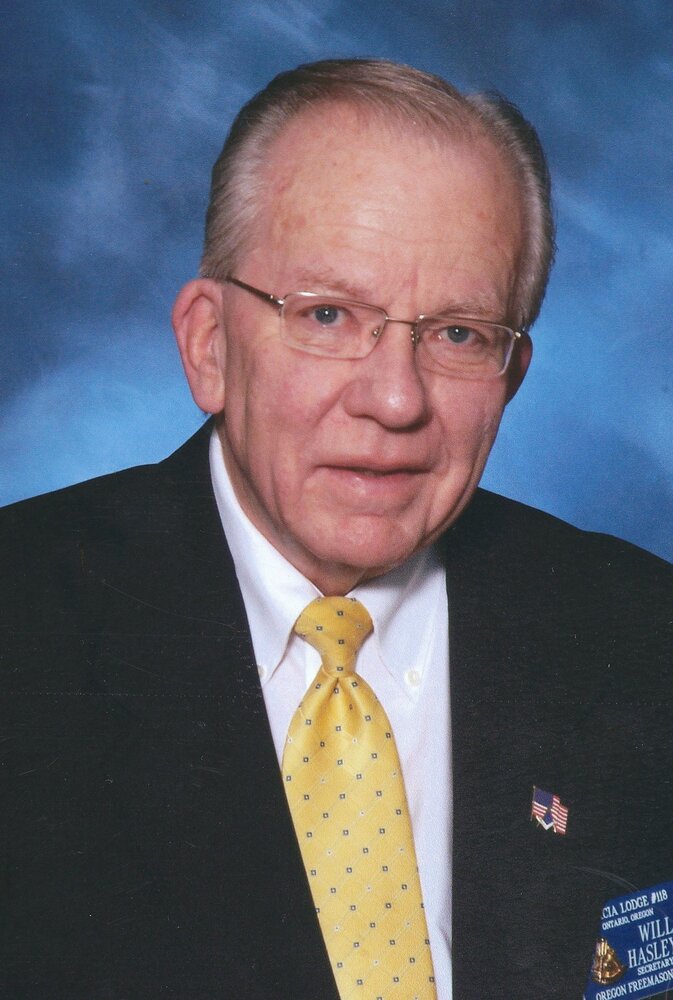 Obituary of Will Hasley

John Willis Hasley (known as Will to friends and family) was born on November 24, 1942, in Burley, Idaho, and entered heaven on October 8, 2022.  His parents, John Lester Hasley and Dorothy Marguerite Sears Hasley were both school teachers. As a very young child, Will moved to Rexburg, Idaho, where his father had accepted a job.  Rexburg was his home until he left to attend Idaho State University in Pocatello, Idaho.

Will was an only child and remembers spending most summers of his childhood growing up on a great uncle's ranch in Southeastern Idaho.  On that 10-thousand-acre ranch near Malta, Idaho, he grew to love the wide-open spaces as he rode his horse through the swaying crested wheatgrass which extended as far as the eye could see until it disappeared into the horizon.

Great Uncle Art and Great Aunt Beulah took Willis under their wing and taught him to be a country boy in those summers which spanned from early childhood into his teenage years.  It was on that ranch that he raised the Cassia County Grand Champion Steer in 1954.  Though he left the ranch behind in his mid-teen years, it remained forever in his heart.

In July of 1957, a gathering of 53,000 boy scouts met at the General Headquarters in Valley Forge, Pennsylvania, for their fourth annual Boy Scout Jamboree.  Will was among the 30 scouts from Madison County that boarded a train in Idaho Falls, on July 2nd for the journey across the United States.  His troop arrived at Jamboree City on July 9th, tired from their sightseeing tour of New York.  In addition to the 10-day stay at Valley Forge,  the 30-day trip included visits to Washington, D.C., Kansas City, New York City, and Niagara Falls.  Postcards to his parents during this time relayed daily events.

On July 18, 1957, after attending a large worship service, he included the following notation in his letter home. "When you get 35,000 scouts singing, Stand Up for Jesus, it really makes you feel good.  The night before we had a meeting at the big stage.  There were 53,000 scouts there. We saw Vice-President Nixon and some other important men.  We sang Home on the Range and the whole valley rang."  On another Sunday morning, more than 50,000 Boy Scouts from across the nation gathered to reaffirm their faith in God and country in the hills of Valley Forge.  As one reads the yellowed newspaper clippings from July 1957, one can understand why this adventure was one of the greatest highlights of Will's young life.

On a Sunday morning at the age of 15, while attending his local church, he spotted a new girl sitting just a few rows ahead of him.  When she turned around, his heart skipped a beat.  He thought she was the most beautiful girl he had ever seen.  After church, he strode forward to meet that girl.  She was there along with her cousins that day.  Introductions were made and from that forth she was always in his mind or at his side.

That particular Sunday he hadn't felt like going to church because he had recently suffered a broken arm while trying to ride a steer at the ranch but, with his arm in a cast, he had made his way to church, and that day was the beginning of a future that would include that girl.

Will's first job after college was as an accountant for a farm implement business.  He then proceeded to management at M.H. King Company and then to Montgomery Ward Company.  At that time he met up with a couple of young, aggressive business partners who were starting dry cleaning businesses in the Northwest.  He was hired to learn the trade and manage one of the new locations in Boise.  As new stores opened, he was transferred to Spokane, Washington, and then to Moscow, Idaho to manage stores in those cities.

It wasn't long before he became an excellent manager and knew the trade so well that he decided to venture out on his own.  He started his businesses in St. Anthony, Idaho, and then Rexburg, Idaho.  The move to Rexburg took the family back to the hometown where he had grown up.

By this time Will and Sandra had two young boys, Todd and Blake.  The family was completed in 1970 when daughter Stephanie was born.  As the children grew, so did Will's businesses, but with the failure of the Teton Dam in 1976, which destroyed businesses, and with other unforeseen circumstances in life, the family chose to leave that area.  They found a new home in Twin Falls, Idaho, where he was involved in transportation.  That eventually involved a move to Ontario, Oregon, where he continued his career in transportation until he retired.

Will's love for boating started at the age of 16 when he purchased his first boat.  Countless hours were spent skiing with his friends behind that pretty red and white boat.  Spending time on the water and snow skiing were his favorite lifetime sports, and he eagerly shared these adventures with his family.

Throughout Will's school years he made many lifelong friends.  As years passed it was always a joy to get together with those friends and reminisce about the great times they had spent together in their young lives.

Throughout his life, he enjoyed being involved in church and community activities.  He served as an officer and exalted ruler in the Elks Organization.  He found his place in Masonry in later years.  He served as master of Acacia Lodge in Ontario in 2015 and was chosen as Oregon Mason of the Year in 2019.

Memorials for John may also be sent to Bethany Presbyterian Church at the above-listed address.

To send flowers to the family or plant a tree in memory of Will Hasley, please visit Tribute Store

Share Your Memory of
Will
Upload Your Memory View All Memories
Be the first to upload a memory!
Share A Memory
Send Flowers
Plant a Tree