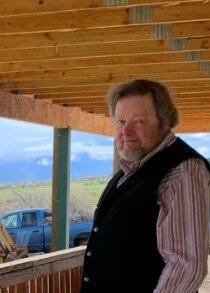 Robert was born and raised on the family farm in Canyon County, Caldwell, Idaho.  He was the sixth child of eight born to Herman and Helena Ebbers. Farming was deeply embedded in his blood. He worked, lived, and slept it his whole life.  This taught him the ethics of hard work that served him well. The mentality of hard work carried him through the good times and bad times his entire life. There was no job on the farm that he could not or would not figure out how to complete.

Robert continued the inherited family legacy of farming 200 acres in Canyon County till 1984 when the farm was sold.  While raising milk cows and later Angus beef the goal was always to raise the necessary feed needed of hay, grain, at times silage, and a money crop of seed corn.  This was hard work and he knew it well.  Outside of farm life, Robert served his Catholic Church wherever he lived. He was a Knights of Columbus member, served as the Grand Knight, and in many other capacities.

In November of 1984, Robert married Fran Peters.   They lived at the River Ranch in Notus, ID until 1996. In 2008 they purchased a bigger outfit at Mitchell Butte by Adrian, OR.  They continued to raise quality cattle and sheep.  Their next move was to the Big Bend area, closer to Adrian, OR. In 2016, Bob went to work for Y-1 Farms, near Jamieson, OR where he worked for Maags.

Robert survived a major ranching accident in June of 2021. Despite all the medical profession did to help bring him through this he lived his remaining life in pain and suffering.  Most importantly he never gave up his faith and knew the Lord was walking this journey with him.  He remains a witness to all who had the privilege of knowing him.  The Lord has now welcomed him home and as he smiles on Bob, He no doubt has said, “Well done good and faithful servant, you have run the race and kept the faith.” There is no greater honor than eternal life with the Lord.

The Funeral Service will be held at the St. Patrick’s Catholic Church in Vale, OR. at 11:00 am. on Saturday, October 1, 2022. The rosary will be prayed prior to the funeral at 10:00 am. The graveside service will follow immediately after the Church service at the Owyhee Cemetery near Nyssa, OR.

To send flowers to the family or plant a tree in memory of Robert Ebbers , please visit Tribute Store

Share Your Memory of
Robert
Upload Your Memory View All Memories
Be the first to upload a memory!
Share A Memory
Send Flowers
Plant a Tree