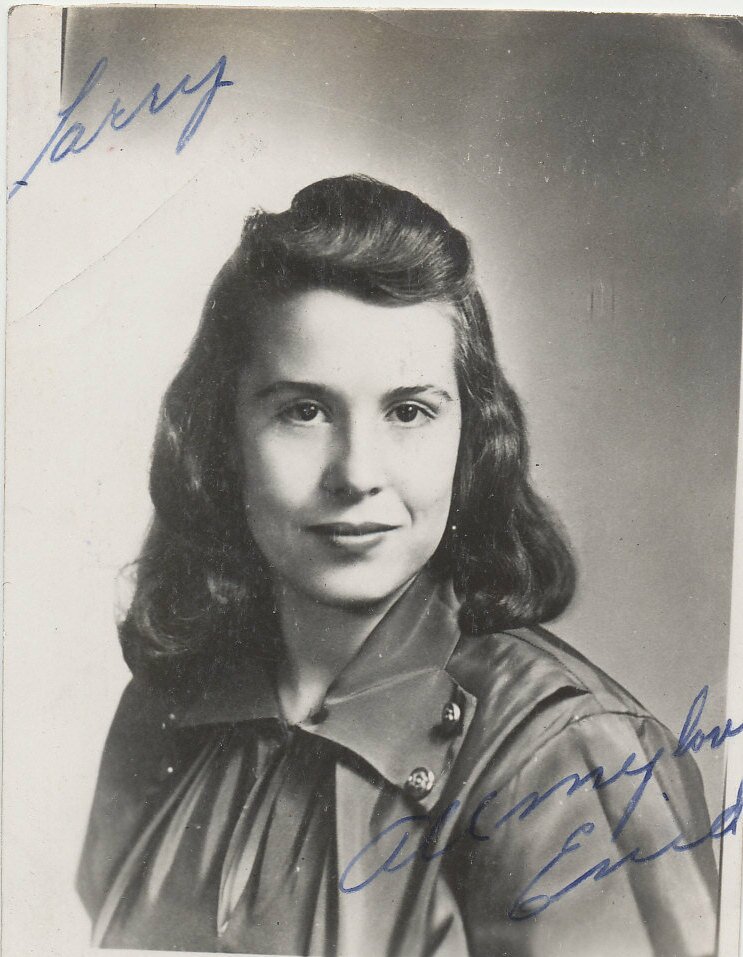 Enid Kroush, 87, of Weiser, formerly of Nampa, Idaho, passed away in the loving arms of her daughter and caregiver of 25 years, on July 23, 2022 in Weiser.  Arrangements under the direction of Thomason Funeral Home.

Enid was born on October, 18, 1934 in Midvale, Idaho to Jack & Gertrude St. Germain.  Her family moved to Emmett where she attended school.  She graduated from Emmett High School and Nampa Business School.  During her school-age years, she became an accomplished tennis player, winning many competitions.  She was also an amazing majorette.  In the eighth grade, she was asked to twirl for her high school marching band, where she remained the head majorette until she graduated in 1953.  She performed her baton twirling everywhere...putting on shows on the roofs of places like A&W Drive Inn & Roe Ann Drive Inn and several other businesses throughout the Treasure Valley.  The batons were lit with fire and lights; putting on an amazing show!  Enid was also a member of the percussion section of the high school orchestra, head of the cheer squad all 4 years.

During her eighth grade year, Enid met her best friend Dixie's older brother, Larry.  The two began dating in 1949 and were married in 1954.  They moved to Las Angeles, California, where Larry started Mortuary College.  Enid worked as a bookkeeper at a car dealership while Larry attened school.  After graduating in 1957 (with the highest of scholastic honors) the couple made their way back to Idaho where they made their home in Nampa.  Larry went to work for Alsips Funeral Chapel and Enid worked as a bookkeeper for Bob Ferdinand, of Ferdinand Metal.  Their family became complete with the addition of their daughter, Angela.  Larry and Enid began the process of purchasing Alsips in 1970.

Enid was extremely active in her community.  She has been president of Alpha Gamma Chapter, Beta Sigma Phi Sorority, treasurer of Beta Sigma Phi, worthy Matron of Nampa Chapter No. 30, Order of the Eastern Star, president of Past Matrons Club, leader of Christian Women's Fellowship at Nampa First Christian Church and young adult chairman of the YWCA.  She served as president of the Woman's Century Club, advisor for Alpha Gamma Chapter of Beta Sigma Phi, Advisor of the Young Women's Club of the YWCA and deaconess of Nampa First Christian Church.  Enid was active in Daughters of the Nile, Iras Temple No. 40 of Boise; Lady Elks; Harmony Club for the Shriners Hospitals; Mercy Hospital Auxiliary; charter member of Can-Ida Chapter National Secretaries Association; Enid held many other offices in all of these organizations.  Enid was president and vice president of Xi Epsilon Chapter of Beta Sigma Phi Sorority; president of the Starlight Club and secretary of Senior Auxiliary (Pink Ladies) at Mercy Medical Center and served as a board member for the Snake River Stampede.  She was an active worker with the United Fund and Cancer Drives, the Mental Health Art Auction and Ball, put on by the Canyon County Mental Health Association, and was involved with the Christmas Shopping Tour for the Idaho State School and Hospital.  Enid appeared in the 1968 & 1970 editions of "Outstanding Young Women of America" in recogintion of her outstanding ability, accomplishments and service to her community, country and profession.

She spent the past 25 years under the care of her daughter.  Enid is survived by her daughter, Angela (Luke) York; grandchildren, Brady (Shelby) Black; Riley (Mike) Johnson; Storm (Colton) Crowley; and Sylais; great grandchildren, Drake; Conner; Scout; Steel and Tripp (to be born in September to Storm and Colton); her brother Jack (Ilene) St. Germain, of Emmett; sister-in-law, Dixie Bloome, of Nampa. Numerous cousins, nephews and nieces. She was preceded in death by her husband, Larry D. Kroush; parents, Jack and Gertrude St. Germain; brother, Doug St. Germain and sisters, Dianna Wines and Carol Browning.

Enid will be remembered by so many as "Grama Enid".  Her family would like to thank all of their friends for all the love and support they showed her throughout the last 25 years.

Enid is reunited with the love of her life and can rest peacefully in Larry's loving arms.

To send flowers to the family or plant a tree in memory of Enid Kroush, please visit Tribute Store