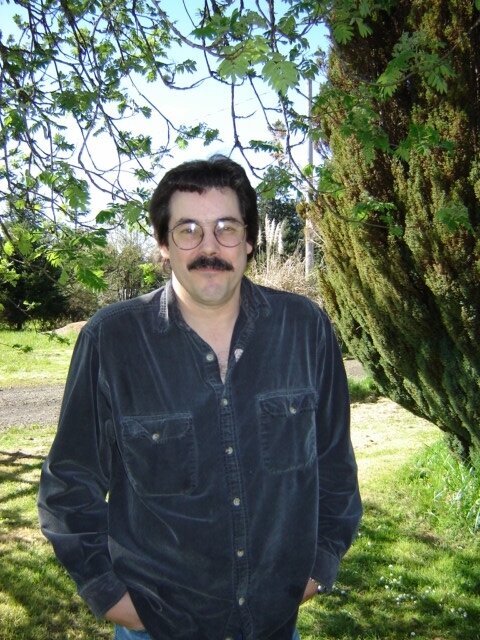 Andy Rodrigues was born on March 16, 1960 in Lynwood, CA, to Daniel Antone Rodrigues and Analee Tohill.  He passed away on Feb. 9, 2022, after a short illness, with family at his bedside.

Andy grew up in Buena Park, CA, where the family lived until they moved to Oregon in 1973.  Although he had a difficult childhood, he eventually made a stable life for himself and was proud of his nearly 30 years of sobriety.

He spent most of his adult years in the Pacific Northwest and worked as a truck driver, fire lookout, mechanic and computer technician.  Because his early years had been so difficult, he also volunteered as a crisis counselor and studied law enforcement because he wanted to make a difference in the world.  He served on Eugene’s Citizen’s Review Board for a time, and was always willing to jump in to help where needed.

He met the love of his life, Rhonda Kenny, in July of 1999, and they built a loving relationship that brought rock-solid stability to them both.  They lived in the Eugene area for many years before moving to western Minnesota where Andy could start a market garden farm, his longtime dream.  Even while living in rural Minnesota, Andy found ways to help those who needed it.  He once mentored a young man whose mother had died a drug-related death: he helped him by lending a sympathetic ear and guidance, but also called around the community to find other resources that could be helpful to him.

He was diagnosed with chronic obstructive pulmonary disease (COPD) when he was in his 30s, and lived the rest of his life managing the disease.  His health began to decline in 2017, and he and his family moved back to the Pacific Northwest so that Rhonda would be near her own family as he declined.  They settled in Ontario.

Trains were a lifelong interest. He started collecting model trains while in Minnesota. After his return to Ontario, he started selling his collection in a local shop on consignment, and on various online sites. He also had a passion for collecting music. His collection was quite extensive and he was always willing to craft a playlist for anyone who asked.

He was predeceased by both of his parents and is survived by his devoted partner of 22 years, Rhonda Kenny; three sisters: Jenny Warkenton, Lori Rodrigues and Melissa Maas, four daughters: Andrea Rodrigues, Vicky Brown, Amanda Burt and Heather Kenny; and 2 grandchildren.  He was important in the life of Rhonda's older children and their children, as well.

The family is grateful for the excellent care Andy received from Saint Alphonsus Medical Center in Ontario, OR.  A service will be held at 2pm on Saturday, June 4 at Lienkaemper Funeral Chapel located at 78 NW 1st Avenue, Ontario, OR.

To send flowers to the family or plant a tree in memory of Andrew Rodrigues , please visit Tribute Store

Share Your Memory of
Andrew
Upload Your Memory View All Memories
Be the first to upload a memory!
Share A Memory
Send Flowers
Plant a Tree