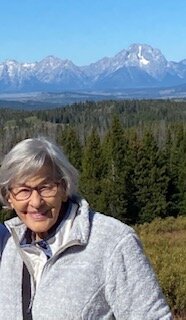 She attended high school in Spray, Oregon.  At 16, she met and married Glen Stout, who was 18 at the time.  They were married on October 16, 1949 in Fossil, Oregon.  They had three children:  Glenda, Karen, and Michael.  They lived in Oregon for many years, but in 1964, they moved to Council and started Stout Logging.  Glen did the logging and Barbara did the bookwork.   Glen often said that he couldn’t have done it without her.  They had a successful business and remained in Council the rest of their lives.

Barbara had a full, interesting life.  She was a person who loved to learn and was undaunted by anything she put her mind to.  She loved to read about everything, but especially early American History.  When Glen got his pilot license, she got hers along with him and became a member of the Ninety-Nines, an organization for women pilots.

She loved to travel and she and Glen traveled to all 50 states and a few different countries.  After Glen passed away in 1990, she continued to travel to a few countries in Europe, and once to South America.  She went on some cruises and met many people who kept in touch with her throughout the years.  She never knew a stranger and always welcomed people to her home.

Barbara was always up for an adventure, whether it be camping, riding in a jet boat, hiking a mountain in Stanley, Idaho (her favorite place of all), or playing cards with the family after Thanksgiving dinner.  She loved God and she was very confident in His love for her.  Because of that, she loved people and lived life joyfully and abundantly by His grace.

Barbara was preceded in death by her husband, Glen Stout, and her son Michael, her parents George and Amine Nichols, her sister, Wilma Brown, her brother and sister-in-law, Paul and Maxine Nichols, brother, Shorty (Carl) Nichols, and son-in-law, Al Harrington.

She is survived by her daughters, Glenda Harrington and Karen (Rod) Endicott;

A memorial service will be held at the Council Community Church, Saturday, April 30, at 2:00 p.m.

To send flowers to the family or plant a tree in memory of Barbara Stout, please visit Tribute Store