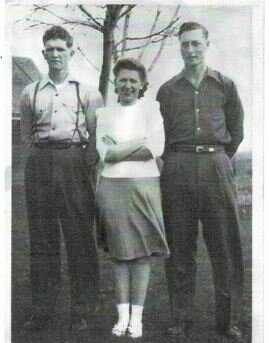 Maxine M. Fox of Midvale, Idaho, passed away February 26, 2022, with her children gathered around. She was residing at that time with her daughter and her husband, Julie and Mike Shockey  in Oro Valley, AZ.

Maxine was born in LaGrande, Oregon, on December 9, 1925. Her family moved to Midvale, Idaho, in 1926 where she grew, along with her younger brother, Dawson, under the tutelage of her father, Adolph Gaertner, immigrant of Dresden, Germany, and her mother, Gladys, who was formerly a Neil from the Imnaha area of Oregon.  Maxine attended the nearby one-room Fairview schoolhouse. She worked with the ranching and farming, alongside her brother and father, spending her fair share of time in the saddle, behind the team, and then on the tractor.  She also worked hard with her mother, canning and gardening, with the geese and the chickens, as well as cooking for family, friends and neighbors, who gathered together for harvesting, as those times warranted. Attending Midvale High School, she played on the women’s basketball team, and met her future husband, Wilfred Fox. America’s entering of World War II with the bombing of Pearl Harbor sent Wilfred and Dawson into the US Army in the Pacific Theater, with Maxine called upon to work even more on the family place. The correspondence received and sent during this time, as well as her scrapbooking efforts of the war, are family keepsakes. Her letters to Wilfred and Dawson were often quickly scrawled between farm chores.

Wilfred and Maxine were wed on the family place April 14, 1951, and they set up housekeeping in a small house across from the high school in Midvale, while Wilfred worked at the mill. Her mother’s failing health set Maxine to work cooking for her father and brother at the home place, as well as her own little household. Their firstborn, Renee, joined them in 1952, as well as son, Bruce, in 1954. They moved to Wilfred’s family home a few miles outside of Midvale, and began their own farming operation. Daughter, Julie, arrived in 1957 and son, Doug, in 1965.

Maxine was always community-minded, sharing garden goods, selling raspberries from her huge patch, teaching piano lessons, the Midvale Garden Club and the Midvale Baptist Church, where she played piano for Sunday services all of her adult life. She served as a volunteer with hospice, and worked on committees that resulted in the Midvale Swimming Pool, the Midvale Community Library, and the building of the Salubria Assisted Living Center in Cambridge. Her love of books led to her 24 years as librarian 1971 to 1994.

Maxine M. Fox was preceded in death by her husband, Wilfred L. Fox, January 18, 2020. Her brother, Dawson, passed in 2004. She is survived by her four children and spouses: Renee Keithley and John, Bruce Fox and Barbara, Julie Shockey and Mike, Douglas Fox and Heidi.  There are six grandchildren, and 17 great grandchildren.

To send flowers to the family or plant a tree in memory of Maxine Fox, please visit Tribute Store