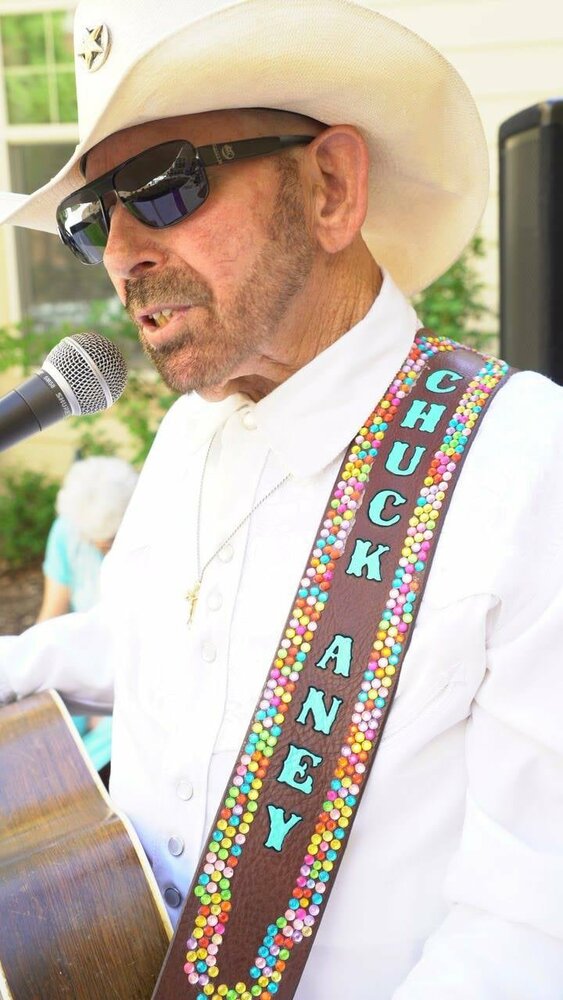 Charles F. Aney, Sr. (Chuck) went to be with his Lord and Savior Jesus Christ Surrounded by his wife and daughters March 5, 2022 at his home in Nyssa. Chuck was born May 12, 1934 in Kendall, Wisconsin to Irene (Goff) and Ralph Aney, he was the youngest of 3 children for a while. When Chuck was a young boy the family moved to Oklahoma. Chuck helped pick cotton along with the family. When he was 15 he left home and moved to Sacramento, California. While growing up he worked odd jobs. In 1956 he bought his first guitar which was a Martin and still has it to this day. Chuck played and sang music all over the Sacramento area with some of the top musicians. He met Georgia Meyer in 1971 and they were married by July 3, 1972. Chuck already had 5 children and Georgia has 3 so we became like the Brady Bunch. The family moved to Elk Grove, California where Chuck and Georgia bought their first home. In 1968 Chuck went back to school and got his diploma. He attended Consumnes River College where he took mechanics. Chuck worked 2-3 jobs to support his family. Some of his jobs were a gas station attendant, State Box Lumber Co., Industrial Minerals, Cashier at the AM/PM he delivered the Sacramento Bee and Sacramento Union newspapers. He had his own business of new houses being built, his employees were his kids, and played music with his band “Chuck Aney and the Country Travelers”. He booked gigs for weeks at a time. In 1992 Chuck and Georgia moved to Nyssa, Oregon where they bought their house and did a complete remodeling of their home. Chuck decided he wanted to drive a truck long haul cross country, him and Georgia did this for 10 years. Chuck played music all over Ontario, Oregon, Weiser, Fruitland, Caldwell, Nampa, Boise, Garden City and Emmett, Idaho at various assisted living facilities. Chuck loved entertaining. He recorded his first single with his daughter Patti “Show Me the Way” April 11, 1977 in Nashville, Tennessee. He recorded 3 more 45 records after that. Then later went back to Nashville and recorded 4 gospel albums and attended the Gospel Music Awards. Chuck also served in the Marines. Chuck was a Religious Volunteer at Snake River Correctional Institute for 11 years. He was loved by all the brothers and considered a father figure too many. Chuck received Christ in 1990 in Elk Grove, California when he went to the liquor store to buy milk. He met a man named Johnny Cates and he led him to Jesus. He attended Elk Grove Full Gospel Community Church and became very good friends with Pastor Daniels. After moving to Nyssa he attended a couple of churches before attending Parma Revival Center where he and Georgia attended for over 20 years. Chuck was truly a man of God and loved Jesus with all his heart. He never met a stranger. In 2019 Chuck went to work for Malheur Express driving people to appointments until January of 2021.

Also he is survived by numerous nieces and nephews, and friends, one longtime friend and fellow musician John Spicer.  Chuck touched many lives and will never be forgotten; we will love and miss him forever.

Visitation Friday, March 18th from 2-5 pm Ontario Lienkaemper Chapel. Funeral Service will be March 21st at 1:00 pm in Parma, Idaho at the Revival Center 102 Wendell Ave.  Interment Hilltop Cemetery. There will be a reception after the services at the Nyssa Senior Center in Nyssa, Oregon. Services under the direction of Lienkaemper Chapel, Nyssa.

To send flowers to the family or plant a tree in memory of Charles Aney, Sr., please visit Tribute Store

Share Your Memory of
Charles
Upload Your Memory View All Memories
Be the first to upload a memory!
Share A Memory
Send Flowers
Plant a Tree