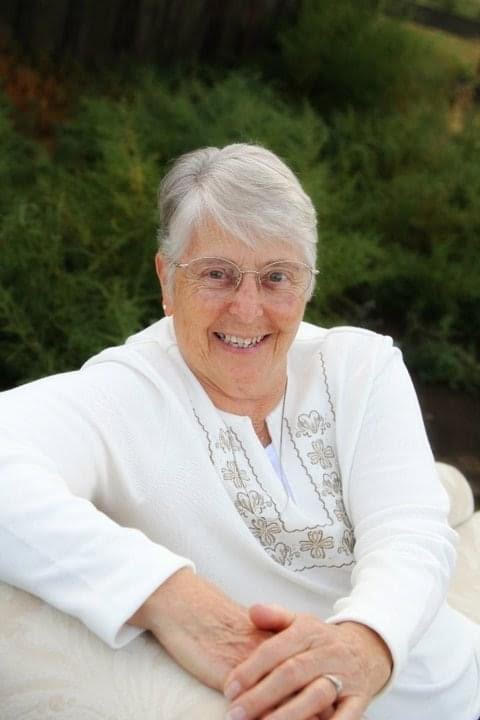 Ione Marie Holaday Woods, 87, passed away peacefully on January 19th, 2022 at Edgewood Spring Creek Memory Care facility with beloved family by her side.

Ione was born December 9, 1934 to Fanchon Richard and Cyril Holaday in Caliente Nevada. She was born second in a line of six siblings and was raised on a ranch near Alamo, NV. She had many fond memories growing up learning to be self-sufficient on the ranch.  She learned to milk a cow before she was old enough to go to school and spent countless hours playing with her siblings in Ash Springs, a naturally occurring hot spring near her home. She learned many other skills on the ranch as a child that served her well throughout her life and she went on to become well known for her amazing baking, delicious canned goods, and beautiful crocheting, sewing, and quilting.

On June 7, 1953, she married Richard Woods (Dick), after being introduced to him by her dear friend. During their life together, they had four children; Alan, Rhea, Rollin and Ray. While raising their four children, they moved countless times throughout California and Nevada, eventually landing in Weiser, McCall, and finally Payette Idaho. Soon after, Dick’s health began to decline due to heart problems. Ione and Dick then moved to Durkee, Oregon where Dick passed away in May of 1991. Ione continued to live in Durkee where everyone was a friend and she was a grandma to so many. She was an amazing artist, both drawing and painting many pieces that the family will forever treasure. She was known far and wide for her wonderful pies, in particular rhubarb, and her delicious cookies and sweet pickles. She had many dear friends that she quilted with weekly and she was a proud member of the Durkee Community.

Ione worked hard her entire life, working odd jobs to help make ends meet. She worked at Ash Grove cement for many years as a custodian and finally cleaning and taking care of the Durkee Community Hall later in life. She was always working on some type of a project or making something for someone. She loved animals and had many different pets in her lifetime. She loved her dogs, cats, chickens, birds, and goats. She was pretty fiesty, and you kind of felt sorry for any varmit who tried to get her chickens because you better believe she was chasing them down with her gun, whether they were on her back porch or not.

She was infinitely proud of her four children and their families. Her four kids and their spouses, six grandchildren, and 12 (plus one more on the way) great-grandchildren were her pride and joy.  Grandma Woods, as she was very affectionately called, was a wonderful grandma to her grandkids and always had a fresh chocolate chip cookie and a hug waiting for them. She will be dearly missed by all.

Ione was preceded in death by her parents, Cyril and Fanchon Holaday, her older brother Newton “Buddy”, her little sister Illa, her stillborn daughter, her daughter in law Charlene, her daughter Rhea Bunch, and her son in law  Rodd Bunch.  She is survived by her son Alan and his partner Patty, her son Rollin and his wife Julie, her son Ray and his wife Betsy, her brother Cyril and his wife Sandy, sister-in-law Ina, grandchildren Jeremy (Kristine), Jessica (Cliff), Dillon (Cynthia), Nathaniel (Sydney), Charlene (Kyle), and Levi (Amanda) as well as her 12 great grandchildren with one more to join the family very soon.

A celebration of Ione’s full and busy life will be held this spring. In lieu of flowers, memorial donations can be made to one of her favorite places; the Durkee Community Hall.  Checks may be sent to Carol Weaver P.O. Box 184 Durkee, Oregon 97905 .  Arrangements under the direction of Thomason Funeral Home.

To send flowers to the family or plant a tree in memory of Ione Woods, please visit Tribute Store