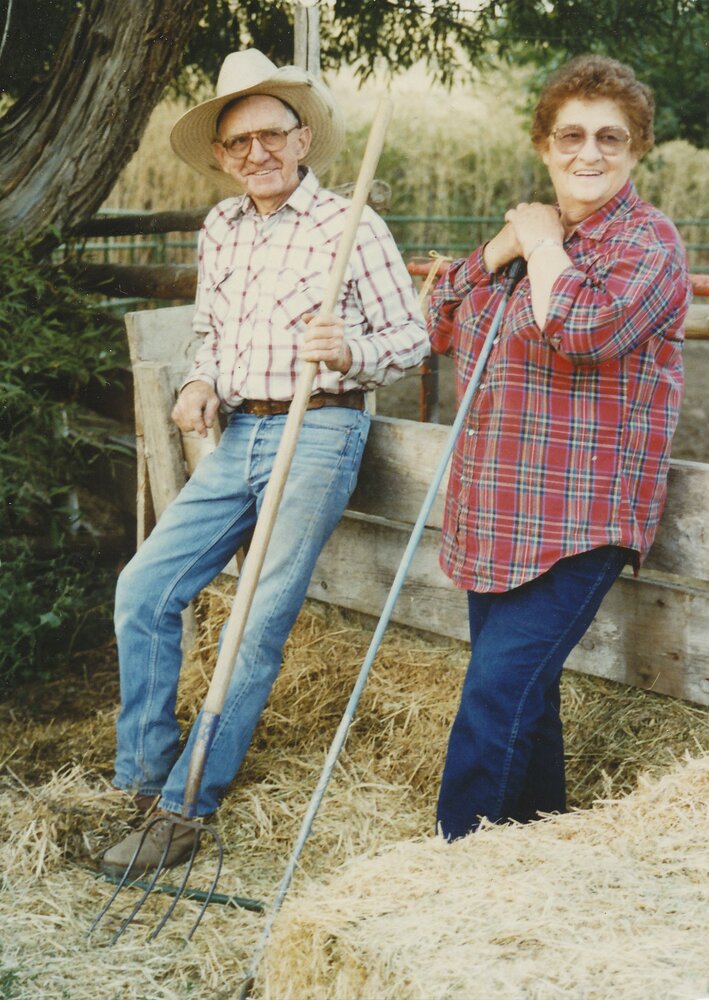 “Many women do noble things, but you surpass them all” Proverbs 31: 29

Aimee Wolfe, 95, Midvale, returned to the side of her husband in the presence of the Lord, Tuesday, December 28, 2021.  A celebration of life will be held at 1:00 p.m., Monday, January 3, 2022 at the Midvale Community Baptist Church.  Dinner will follow at the VFW Hall in Midvale.

Aimee was born August 17, 1926 on a homestead located at Linsen Creek in the Little Willow area outside of Payette, Idaho.  She was the 3rd of 9 kids born to Paul & Ruth Jacks, Sr.  The family moved to Happy Hollow area outside of Midvale when she was 5.  She attended the Happy Hollow School, where she met the love of her life, Robert “Bob” Wolfe.  They were married on March 17, 1942 at the age of 15 and 20 in Payette, Idaho in a double wedding ceremony with her brother Paul Jacks Jr.  and Cora.  This was the beginning of over 60 years working side by side.  They spent their first few years together herding sheep in the High Valley area and worked for ranchers in Council and Midvale.  In 1945 their son, Jim was born.  Bob entered the Army in March, and served in the Philippines.  During that time Aimee lived with her parents in Midvale until Bob returned in June, 1946.  They began ranching and raising their family in Midvale to which they added a daughter, Peggy a few years later.   Aimee loved the country life and during the summer could be found driving the swather to cut the hay or the tractor to stack.  In the winter she helped feed the cows and drove the tractor while Bob threw the hay off the wagon.  There was no hill too steep for Aimee to climb when she was driving the tractor.  She enjoyed horseback riding and with her faithful horse Skeeter she traveled many miles moving cows and riding fence.    Aimee faithfully attended all sporting and fair events her kids, grandchildren and great-grandchildren participated in.  Later in life as it became more difficult for her to attend, she still followed their events in the newspaper and with phone calls.

Aimee was a devoted member of the Midvale Community Baptist Church and served on many committees throughout the years.  She thoroughly enjoyed attending church with family by her side.  For many years Aimee’s Dad was a Senior Judge for the elections.  When he retired Aimee assumed the position and oversaw the elections in the Midvale precinct for many years.

Bob passed away in July, 2002, which left her heartbroken.  With the help of her family she continued ranching up until the age of 89.  The family always said she had some of the meanest cows so she sold them to family so we could continue to “enjoy” them.   She could still be seen running the swather in the summer to help out the grandkids until her swather couldn’t be repaired any longer.  Later in life her brother Alan moved in so they could take care of each other.   They were often seen driving the roads checking up on the family and the wildlife.

In Lieu of flowers the family suggest memorials be made to the Midvale Community Baptist Church, PO Box 121, Midvale, Idaho  or the Midvale EMT’s, PO Box 43, Midvale, ID  83645.

To send flowers to the family or plant a tree in memory of Aimee Wolfe, please visit Tribute Store