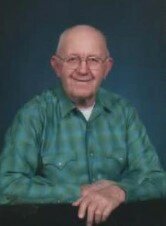 Robert Raymond “Bob”  Bradfield danced his way into the arms of the love of his life, Eleanor, as she came to help him home to heaven on December 10, 2021.  Bob was born July 8, 1928 to Ted and Iva (Storie) Bradfield in Yerington, NV.  He started life growing up in Ludwig, NV where his Dad worked in the mine.  His sister Carol was born there in 1931.  His family moved to Eugene and eventually Durkee, located in Eastern Oregon.  Bob attended school in Lime, Durkee, Pleasant Valley, North Powder and Muddy Creek.   He was a member of the last graduating class of Muddy Creek High School near North Powder.  After graduation he worked with his dad farming until he joined the Navy.  On October 18, 1948 he reported for boot camp at San Diego, CA.  He was a fireman and worked in the boiler room of the USS William C Lawe DD-763.  He spent most of his Navy career seasick.  The guys took pity on him, emptied a big tool box, put blankets in it and he laid on his back and watched the gages, until an officer came into the room. In the spring of 1950, his Dad broke his back in a farming accident.  A friend of his parents contacted Senator Wayne Morese to get Bob a hardship discharge so he could get home to take care of the farm.  Farming was in essential industry. Bob received an honorable discharge on April 24, 1950, serving 1 year, 6 months and 7 days, on USS William C Lawe DD-763 in Newport RI.  He drove his buddy’s car from there to Spokane.  It sounded like quite an adventure, maybe that’s where he got the “travel bug.”  After his dad was well, Bob tried several professions.  He tried his hand at cruising timber and even worked on a tug boat for one day.  Finally ending up working for Union Pacific- dismantling steam locomotives.  It was while working for UP in La Grande that he traveled with cousin Dorothy and Everett Cameron to Vale for an El Campo dance on March 7, 1953.  There he saw a pretty lady, Eleanor “Biddy” Reed, her date was a member of the band so wasn’t dancing much – leaving Bob the perfect opportunity. Eleanor also lived in La Grande.  They were married June 7, 1953.  After the railroad he worked for the State Highway Division between Baker and Durkee.  When Eleanor got pregnant with Debbie in 1956, they gave up the tiny travel trailer and bought an Atlantic Richfield service station in Boise.  In the spring of 1958 they decided to move to Baker and build a house.  Bob worked for Clark Auto Electric rebuilding motors and generators.  Brent joined the family that year.  In 1961, they were offered the chance to buy the Irvin Reed place.  They moved to Vale where son Brian was born in 1963 and have been in Vale for the last 60 years.  Bob milked cows, raised pigs and chickens, and farmed 160 acers.  He was a member of the Dairyman’s Association, served as a 4-H leader and was a member of the Malheur County Historical Society.  With the down turn in the Ag Industry, they moved into Vale in 1987.  Bob worked for Ray Belnap, Darrell Standage and finally MB&L.  In 2006, Eleanor passed away unexpectedly leaving Bob lost and alone.  In the spring of 2007, Donna Faw Hale offered to cook meals for him.  They enjoyed a very special friendship until Donna passed away in 2019. He and Donna were living at Pioneer Place Assisted Living.  We are very grateful for the Faw family and the love they gave to Bob.  After Donna’s passing, Bob was lost again.  We are so thankful for the loving staff and care Pioneer Place has given him the last two years.  The staff loved Bob and his sense of humor.  Bob loved to get away, whether to Colorado or Texas to see the Jones/Bidwell crew, camping vacations with Brent and Becky, or holiday meals and Storie Reunions with Brian’s family.  Tinkering on anything mechanical with grandsons Travis, Colton and Tony brought Bob great joy.  Travis was his “go-to-guy” whether working at his house or on the scooters.  Bob’s passing has left a big hole in a lot of lives. He leaves Debbie & Paul Jones-Pueblo West CO, Brent Bradfield & Becky Avalia-Irrigon OR, Brian  & Tina Bradfield Vale OR, grandchildren—Travis Bradfield, Colton & Skye Bradfield, Tony Bradfield, Carolyn & Aaron Bidwell, Misty & Jake Smith, Danny Bernard Jr, great granddaughter Adreena Bidwell, sister-in-law Nelora Jordan &  family, and nephews Steve Smith, Ryan Smith and Skylar Smith to remember him.  He was proceeded in death by his parents Ted & Iva Bradfield, his in-laws Irvin & Bessie Reed, sister and family, Carol, Lyle and Scott Smith, brother-in-law Dick Jordan and niece Laura Sword.  The Celebration of Bob’s life will be held Friday March 4, 2022, 11:00 am at the Vale Christian Church with internment at Valley View Cemetery. He will be remembered as a gentle man, with a big heart for his family and a quick sense of humor.  In lieu of flowers, memorials may be made to The Malheur County Historical Society—First National Bank of Vale Project in Bob’s memory, P.O. Box 691, Ontario, OR 97914. He wanted to be a part of the project, and now he can.

To send flowers to the family or plant a tree in memory of Bob Bradfield, please visit Tribute Store