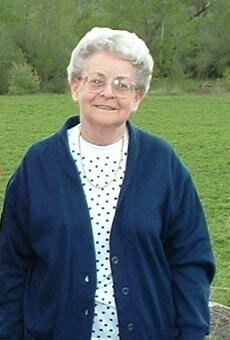 Lucille Ellen Franklin, 90, of Cambridge, ID passed away Wednesday, November 3, 2021 at a Weiser, ID hospital. She was born March 5, 1931 on a ranch near Castle Rock, CO, the second daughter of P.H. “Dick” Clarke and Esther Benson Clarke. She joined a sister Lillian at home. Later a brother Ronald and another sister Dixie completed the family.

The Clarke family moved to Boise, ID where Lucille and Lillian attended the old Garfield Elementary School. They moved to Council, ID when Dick and Esther purchased a ranch north of town. Lucille earned spending money baby sitting and working in town at the Golden Rule store. She spent the money on a camera and film and took many of the family’s photos.

Lucille married John “Johnnie” Franklin of Mesa, ID on May 14, 1949 at Cambridge, ID. They lived at the Mesa Orchards where their first son John Michael was born. When the Mesa Orchard Company went bankrupt, they moved to Council, ID where their second son Gary was born.

Johnnie worked for the Boise Payette Sawmill, Childers’s Automotive and Council Electric. When Council Electric opened a branch store in Cambridge, ID the Franklins moved to Cambridge to work in it. In 1958, Johnnie and Lucille opened their first store in what is now the Cambridge Museum. They did electric and plumbing work, sold appliances, TVs, radios, furniture, and electric and plumbing supplies.

In 1963, the family moved to Palm Springs, CA. But after 3 years the desert heat convinced them that maybe Cambridge did have a better climate.

In 1973 Johnnie, Lucille and son Gary purchased The Wilson Building and opened Franklin Electric and Plumbing. Lucille worked at the store for 40 years until a stroke forced her into retirement.

Lucille will be buried next to her husband Johnnie and son Mike at the Council IOOF Cemetery.

The family thanks Lisa, Kelly, Rella and Stacey for the aid they gave Lucille this last year. And we thank the Cambridge Volunteer Ambulance crews who three times answered the call to help Lucille.

To send flowers to the family or plant a tree in memory of Lucille Franklin, please visit Tribute Store