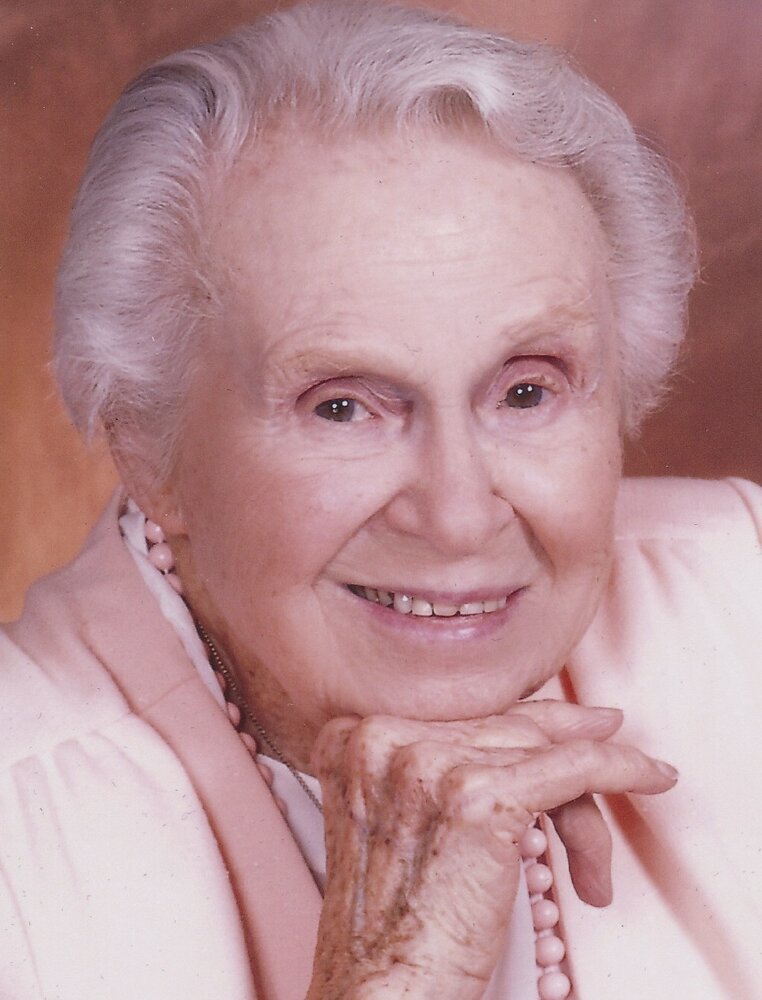 Carolyn left us on October 24, 2021, at the assisted living facility, Salubria Center, in Cambridge Idaho, to enter Heaven to be with her Lord and Savior, Jesus Christ. She is now in perfect health, no longer having limited vision from Macular Degeneration that diminished her enjoyment of life here.

When a child was born November 7, 1920, to Charles Franklin and Maude Fay Sheffield Donart, no thought was given to her living for almost 101 years. This second child, named Carolyn Frances Donart, of Charlie and Maude Donart, was a determined redhead that met the challenges of life head-on. She arrived when they lived in Caldwell Idaho and shortly after that they needed to move to Portland Oregon for daughter Lucille’s health. She had the flu and it resulted in damage to her heart. The family lived in Portland until Carolyn was 16 years old and it was determined that Charlie would be healthier in a drier climate which gave them the opportunity to return to Salubria, Idaho where he had grown-up.

Now there were five children; Harriet Lucille, Carolyn Frances, John Edward (Jack), Marylou Ruth, and Sarah Jane. Lucille and Carolyn enrolled in Cambridge High School, getting acquainted with their classmates and neighbors.  Carolyn missed the tennis courts she loved in Portland but found substitutes to keep her active in sports. Basketball was her sport to participate in and the baseball town team became her interest to watch and cheer for. There was a particular pitcher that drew her interest at some point, Bud Wilkerson, which made going to the games much more interesting.

Carolyn graduated high school in 1939. She and L. Kenneth (Bud) Wilkerson were married on June 8, 1941. They settled on the Wilkerson family ranch and farm, living with his family for the first few years. Their first son, Gerald Kenneth (Gerry) was born in June 1943 and was welcomed by the open arms of grandparents, aunts, and uncles, as well as his parents. She has commented about that time, that she wasn’t sure Gerry got a chance to be on the floor or outside in the grass with so many people around that wanted to hold him until he was about the age to walk. Soon they moved to a small house across the field from the main house when they were expecting their second child, Charles Russell, in February 1945. A bedroom was added to the one room house when they were expecting their third child, Charlotte Frances, in October 1947.

During this pause in the growing family an electric refrigerator and electric stove were added to make life a bit easier. Keeping up with children, growing a garden, crocheting, keeping up with all the family near and far (Lucille was in Portland OR with her family), Valley View Sunday School meetings, Carolyn was kept busy. In 1952 a larger house was built to accommodate four children and was a little closer to the highway across the pasture. Claudia Fay was born June 1952 on a Sunday, and Russell asked his mom why she couldn’t wait to get the baby until after Sunday School because that is what we did on Sunday morning. When Carolyn and Bud brought Claudia home from the hospital we were all moved into the new house.

Carolyn always welcomed her children’s friends into her home and mostly treated them like they were her own, and if they needed disciplined she probably would do so with a word of reprimand or send them home. She was fair to all, even if we didn’t think so at the time. Teammates in high school boys’ basketball would often catch the bus for away games at the Wilkerson house and Carolyn would provide them with a good meal before they left. Quite often Chocolate Cake was dessert, especially if Jim Avery was there and he started calling her “Betty Crocker”.  Gerry brought friends home from Boise Junior College and while he was in the Air Force. This was normal even when Charlotte called from Boise College and asked to bring from one to six kids with her for the weekend.  A long list of instances could be given as an example of her encouragement to her children as well as encouragement to her grandkids and nieces and nephews. One grandson and his family, Gordon & Maryanne Wilkerson plus Andrea, and Tanya, stayed on the ranch; and they were so very close, physically and emotionally, with Grandma and Grandpa Wilkerson. Another grandson, Chuck, was close until he moved away from the ranch to a career that didn’t include tractors and horses. Some of the grands lived with Carolyn and Bud for a few weeks or months for different reasons, but they were always so willing to take them and love them. Nieces and nephews spent various times living or visiting and loving it on the ranch.

The boldest and most important example she gave us was her relationship with her Lord and Savior Jesus Christ. It was a daily way of living. She welcomed missionaries into her home multitudes of times when they were either holding a service here or passing through to someplace else. Her favorite Bible verses were Proverbs 3: 5 & 6 “Trust in the Lord with all thine heart and lean not unto thine own understanding. In all thy ways acknowledge Him and He shall direct thy paths.” Put that with her favorite saying, we are “Making Memories”, no matter if we were have a really good time or not so good a time, and it paints a picture of how she approached life’s situations.

Maude Donart started a library in Cambridge using a portion of space in her “Victory Bible House” store. When it grew too big for this space the community obtained another building to house the library. She continued working as the librarian but was getting to the age that she needed help and Carolyn was that help. When Maude could no longer go to the library to work, Carolyn was asked to stay on as the librarian, which started a whole new phase of life for her. During this time, she had several Cambridge High School students that came to work with her in a work study type program. She got to know several of the students that she had mostly known only a little bit and thoroughly enjoyed the endeavor. As computers were being introduced into the Idaho library system she became very hesitant and decided it was time to retire and let the younger generations take over.

Carolyn and Bud did a little more traveling, just to see new country in the Northwest and to visit family scattered over this area. Also, it became a transition time of a few health challenges that found them busier than before in many ways and not nearly as pleasurable. Together they always seemed to be looking forward to the next day as long as they were together. The bubble burst for Carolyn when Bud died suddenly on August 31, 2000. After 59 years of marriage, she wasn’t going to see his beautiful blue eyes and great smile ever again. The strong hands that held hers, the teasing demeanor wasn’t going to be returned by Bud, and a lot of energy was lost for Carolyn. God, however, had more for her to do here on Earth, so he kept her motivated to live for Him for 21 more years. For 18 of those years, she lived in her own home and three years she lived at the Salubria Center assisted living. The staff at Salubria Center cared for her like family and she remained as independent as she possibly could, giving up taking care of herself uneasily. She was “frisky”, as they said, and lived up to being a “redhead” (with white hair) up to the end. One thing that made her life very positive during this time was a partial loss of memory, and it was all the stressful times in her life, especially any of the health issues, that she lost. Consequently, she didn’t dwell on the past. Her sense of humor never left her up to the end.  When she passed from this life and walked into her eternal life with God, it was with the love of her family and in the presence of Joan Wilkerson who is a treasure for the whole family for her care during the last week of Carolyn’s life.

Carolyn was predeceased by her husband, Bud, her parents, her sister Lucille Clouse (age 32, from heart disease caused by the flu when she was very young), Jack Donart (age 21, from polio), daughter-in-law Shirley Wilkerson, brothers-in-law Joe Cooper and Fred Miller, nephew Joe Clouse, and many cousins and friends.  She is survived by two sisters, Ruth Miller, and Sarah Cooper and all their children and grandchildren; her children, Gerry, Russell (Jan), Charlotte (Ron) Hamilton, Claudia Arlington; nine grandchildren, 11 great grandchildren, 5 great-great grandchildren with two more due in a few months; special cousin/daughter, Patt Hart Keats; two ex-daughters-in-law, Joan Wilkerson and Shawna Yasuda, who are the mothers of four of her grandchildren and were also her friends; and many nieces and nephews.

A graveside service is being planned and attendance is for family only.  In a few months, when there is better control of covid we are planning to have a Celebration of Life that will be open to anyone who would like to attend.

Instead of flowers memorials may be made in Carolyn’s name to the Cambridge First Baptist Church,

To send flowers to the family or plant a tree in memory of Carolyn Wilkerson, please visit Tribute Store