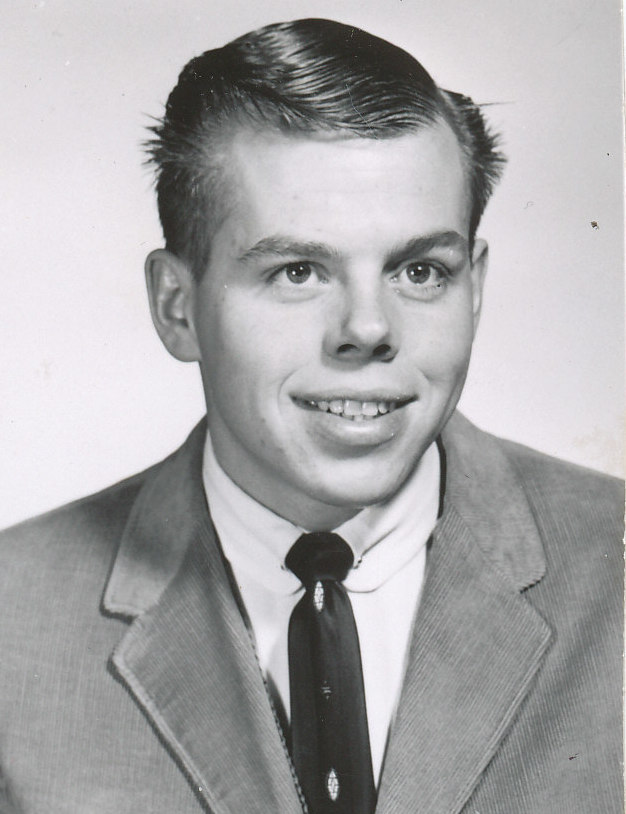 Glenn Millard Walker was born on September 25, 1940 to Don and June Walker. He had three brothers, Don, Frank, and David. They moved several times in their youth, spending time in Idaho Falls, West Yellowstone, and Inglewood, California until an earthquake scared them to Nyssa, Oregon.

Glenn graduated from the infamous class of ‘58. He ran track and field, which was his favorite sport. His favorite was the 4x100, which he ran with his brothers, everyone wanted to beat the Walker brothers. Glenn attended Boise Junior College and ran track for the legendary Ray Lewis, who was one of the most influential men in his life. Coach Lewis helped Glenn get a scholarship at Central Washington in Ellensburg WA, where Glenn flourished and earned the nickname “Scooter” because he was so fast. In 1964 he had a qualifying time for the 100 yard dash for the Olympic trials. At Central, Glenn joined the fraternity Elwood Manor, where he met some of his greatest friends. Growing up we were entertained by numerous stories of Elwood Manor.

In August of 1966 Glenn married Sally Holmes. They had three children, Jeff, Nikki, and Casey. Glenn was a PE and Health teacher at Nyssa; he also coached football, wrestling, and track. Glenn was a player’s coach who would stay later after practice so his athletes could get extra reps at the pole vault. There were times he had to shovel snow off the track so kids could get an early start. There was nothing he loved more than coaching, he had a gift of seeing kid’s hidden talents.

Glenn decided to become an Administrator after teaching for several years. He received his Masters from Brigham Young University. The Walker family moved around the state of Oregon. Glenn’s first job was a Superintendent at Dayville, next came the Dean of Students at Fremont Middle School in Roseburg, then Principal at Stanfield High School, and Principal of Lakeview. In 1989 Glenn came home to Nyssa and retired as the Principal of Nyssa High School. After retiring he decided to try teaching again, and became a PE/Health teacher at Harper School. He ended his career doing what he loved most, teaching kids.

Glenn had several hobbies: he loved photography and won several blue ribbons at the Malheur County Fair. He always had a book nearby and was known for reading an entire series from start to finish. Glenn loved watching movies, his favorite was Shane, he watched it every time it was on TV. He saw Spiderman with Chase in the theatre six times. Glenn’s favorite Saturday activity was watching sports, he loved college football, Indy-car races, the NFL, and Yankees baseball.

Glenn was a member of the Church of Jesus Christ of Latter Saints. He had a strong testimony of the restored gospel. He served in several church positions but his favorite was serving at the Ontario prison. He truly loved those inmates, who would call and visit him when they were released. He was never judgmental with them and showed them genuine love.

Glenn is survived by his son Jeff, his daughter Nikki her husband Chad and their four kids Cayla, Ally, Payton, and Gus, his son Casey, his wife Krissy and their four kids, Olivia Chase, Laynee, and Jesse and one special Great Granddaughter Bea. Glenn loved his grandchildren more than anything. He spent hours driving to all of their sports activities. If you ask the grandkids, they would say they had the coolest Grandpa around. Nothing meant more to Glenn than family. When Sally passed, he visited her grave almost daily for many years. Sometimes during the winter someone would shovel a path so he could get to her gravesite. After an eight year separation, our Mom and Dad are together again.

The family wishes to thank all of my Dad’s friends who helped him during the last eight years of his life, as well as the great doctors: Kido and Lovelace, Page, Elam, Nowierski, the pharmacists at M&W, and others. Finally, and most importantly, the family wishes to thank Nurse Bekka and the other nurses at Saint Luke’s Telemetry in Meridian, who personally oversaw his final moments. They are proof that angels walk the earth. Condolences to the family at www.lienkaemper/thomason.com

A viewing will be held on Friday July, 30 at Lienkaemper Chapel in Nyssa from 7-8:30pm. Saturday, July 31st a second viewing will be held at 9-10:30am at the Nyssa LDS Stake Center located at 1309 Park Avenue in Nyssa. Funeral services will be followed at 11:00. Instead of flowers or donations, the family would rather you take the money and do something with your family and create a memory. Thank you.

To send flowers to the family or plant a tree in memory of Glenn Walker, please visit Tribute Store
Friday
30
July