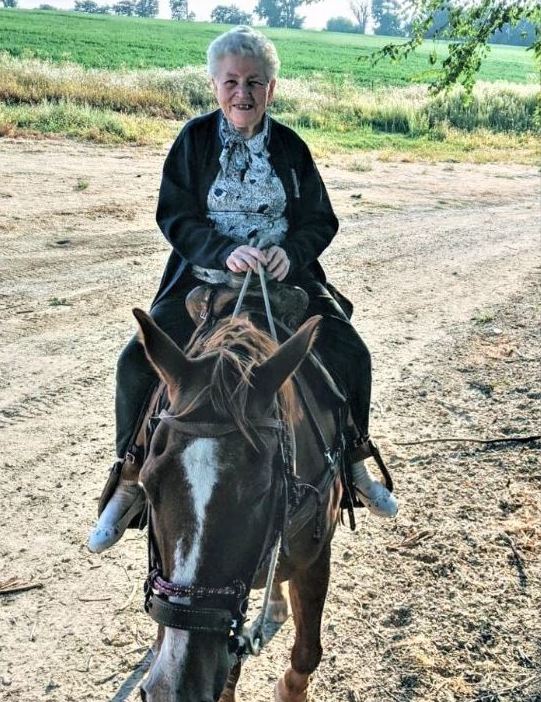 Betty often told stories of the “Ranch” in Hardman. Betty’s favorite memories were of her on a horse with her dad. Betty’s was definitely a daddy’s girl, which made it especially difficult for her when she lost her father when she was 16.

Betty attended Oregon State University, yes, Go Beavers. She Graduated in the Class of 1948 with a Degree in Home Economics. As a member of Kappa Delta, she lived on campus in Snell Hall. Betty remembers this time distinctly as there were very few men on campus. They were away during World War II. There was always social event on campus such as skits and dances that Betty attended.

After graduation, Betty was off to teach school in Vale Oregon where she taught home economics, English and leathercraft at Vale High School. Betty met and married the “Love of her Life”, Ted Schaffeld. They were married November 22nd 1950. Ted and Betty milked cows, farmed and raised a family on their farm outside Ontario Oregon. Betty welcomed her first child Jane Elaine followed by James Theodore, Susan Arlene, Charles Wayne, Richard Lee, Floyd Henry and Sharon Christina. Betty and Ted suffered the ultimate heart break, losing a child in a farming accident.  Jane joined our father in Heaven April 3rd 1956.

Betty worked hard along Teds side every day they were partners in everything. They built their farm and home out of nothing but hard work, faith and family. After milking cows for 41 years retirement came in 1990. In retirement they made many trips to see children and grandchild including the great Alaska trip, time at the beach and Eagle Crest. Ted joined our Heavenly Father February 18th 1992. Betty never re-married. She will tell you, after all the years of hard work and heart breaks if she had the choice to re marry Ted knowing exactly how it would be she would have married him all over again. Ted was very much the love of her life. I know that Ted was waiting to take her hand again when she left us.

If anyone thought Betty would be bored or have time on your hands you would be wrong. Betty stayed very busy as the head of this large family. When she was not canning, swimming, playing Mexican train or working in her garden she spent time chasing 17 grandkids and 35 great grandkids.  When you would stop by Betty would be sewing costumes for Chuck’s girls or trying to patch Wayne and Greg’s Rodeo clothes. Sometimes she would hold up just shreds of clothes just shaking her head and chuckling. Betty was a regular attender of plays, music concerts and sporting events including state championships but not limited to Rodeo and/or Church Camp. Every summer she would “can” special things for her boys including beets, peaches, apple sauce and pickles.

I can tell you without a doubt that Christmas Eve dinner is at Grandmas as well as Easter Dinners are at 1:00 PM. Holidays were so much fun. When I say fun, it has nothing to do with gifts but with laughter, family and traditions. Christmas started early with the making of a variety of Christmas Candy, popcorn balls and decorating for Christmas. Betty loved pretty things. There was a story and meaning for all of the decorations. Easter was a continuation of great family times. Easter started with dinner then Easter egg hunt leading to the very exciting pinata that was always more of a work out for Uncle Chuck on the rope than the kids swinging the bat. Then the hunt is on for the Easter baskets. The stories I could tell. Bring your shovels, boots, ropes and imagination on where to hide or find the basket.

In 1999 Betty let us know that she had completed all the shots she would need so that she could go on vacation with her sister Nancy to Massachusetts. We had to let grandma know that Peru was not in the USA. Betty spent two of the most amazing weeks with Nancy visiting Machupicchu, visiting the Rain Forest and riding the Amazon River. While I know the sights and trip were exciting, this was the last time Nancy and Betty were together. They had agreed to meet next time in heaven.

Betty was more than a mom, grandma, aunt, cousin or sister.  She was our Rock and always a place to find love and security. Betty is preceded in death by her parents-Floyd and Ethel Adams, husband-Ted Schaffeld, Daughter-Jane and her two sisters, Clara Bell Roscoe and Nancy Malone. Betty is survived by her children Jim (Debbie) Schaffeld, Susan (Dave) Harris, Chuck (Pam) Schaffeld, Dick (Sandy) Schaffeld, Hank (Pam) Schaffeld, Sharon (Carl) Shaver, 7 grandchildren and spouses, 17 great grandchildren and dozens of nieces and nephews and so many more in our large and amazing family.

Betty’s life will be Celebrated Saturday May 15th at 10:00 AM at the Vale Christian Church in Vale Oregon. Graveside service will be at 2:00 PM at the Sunset Cemetery in Ontario Oregon. The service is under the care of Lienkaemper Funeral Chapel Ontario.

To send flowers to the family or plant a tree in memory of Betty Schaffeld, please visit Tribute Store