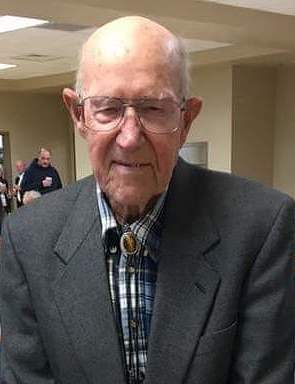 Russel “Rusty” Wayne Girvin, 99, of Vale, Oregon was born August 15, 1921 in Creighton Valley, Nebraska and passed away April 18, 2021 at Pioneer Assisted Living, Vale, Oregon.  His parents were John and Jennie Dickinson Girvin.  He left Nebraska when he was 15 and moved with his family to Vale on March 13, 1937 during the Nebraska Dust Bowl. He had two brothers, Blaine, Bob and four sisters, Margaret Ross, Thelma Marcum, Erma Tschida and Bonnie Magnuson.

Rusty had completed the eighth grade in Nebraska and decided to help on the farm rather than complete his education.  He also worked for others feeding sheep, milking cows and farm work.

Rusty met his life-long sweetheart, Margueritte Harris, at a social at Hope Hall.  They were married January 1, 1942 for 71 years.  They lived in Vale renting farm ground.  Jackie was born that same year.

He was drafted into the Army the fall of 1942 and spent the next three years mostly in the South Pacific as a scout.  When he returned home, he continued to rent farm ground and a son, Howard, was born.  In the Spring of 1948 Rusty’s name was drawn to have a homestead in Tulelake, California.  The family moved and lived there for three and a half years, adding another son, David and a daughter Barbara before moving back to Vale buying the place on Bishop Road.

Rusty loved spending time with his family.  He enjoyed people and never met a stranger. After retirement you would find him fishing, camping, spending winters in Arizona with friends, traveling to Alaska, visiting family in Scotland, playing dominos and Pinocle.

Rusty was preceded in death by his parents, brothers, three sisters, and his two sons.  He is survived by his daughters, Jackie (Stanley) Sisson, Nyssa and Barbara Morales, Payette, daughter-in-law, Janet Girvin, Vale, 14 Grandchildren, 42 Great-Grandchildren and 10 Great, Great Grandchildren and his sister, Bonnie Magnuson, Fruitland, Idaho.

A viewing will be Friday April 23, from 6-8 pm at the Vale Lienkaemper Chapel, 222 Yakima Street South Vale, Oregon.

A graveside service will be held at Valley View Cemetery, Vale, Oregon, Saturday, April 24 at 2:00 p.m.  Feel free to bring a chair with you.  Memorials in Rusty’s name, maybe made to Pioneer Assisted Living1060 D Street West, Vale, Oregon 97918.

To send flowers to the family or plant a tree in memory of Russel Girvin, please visit Tribute Store