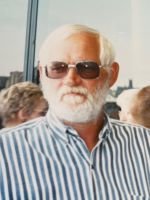 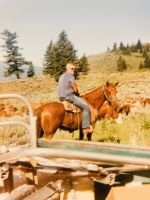 On Easter Sunday morning, April 4, 2021, after a short, hard fought battle with cancer, our beloved husband, dad, grandpa and brother, Charles Robert Edwards, 73, quietly passed away at home in Cambridge, with his wife and his four daughters by his side.  Charles was born at his childhood home on Rush Creek in Cambridge, Idaho on September 3, 1947, to Elmo and Clara (Wilson) Edwards.  He grew up on the family ranch with his 2 older sisters, Deanna and Delma and his older brother, Lavelle.  As children, he and Lavelle spent endless hours playing, fishing, hunting and working on the ranch.  They formed a very close bond as they grew up working together on the family ranch as well as helping neighbors and friends.

Charles attended Cambridge schools and graduated from Cambridge High School in 1965 where he excelled in football, basketball and student government.  He, Lavelle and their friends spent any free time dragging main and chasing girls.  Like his brother, he attended Idaho State University where he earned his teaching degree in 1969.  Upon graduation he began teaching history and coaching at Nampa High School, winning the 1969 Idaho State Cross Country Championship.

On July 12, 1969, Charles married the love of his life, Jackie Lanter.  Their love story is one of a kind.  After attending elementary school together, Jackie’s family moved to Washington.  However, in the spring of 1968, their paths would cross again on the interstate to Pocatello.  Charles was headed back to ISU after his spring break and Jackie, a University of Idaho student, just starting her spring break, was headed to ISU to visit her sister.   Recognizing each other as he passed her on the freeway, they pulled over and Charles eagerly agreed to allow her to follow him to campus.  From that week on, they continued to see each other and were engaged in March 1969.  They established their home in a red brick house in the heart of Cambridge while Charles commuted to Nampa and Jackie was teaching in Cambridge.  In the Winter of 1970, the family ranch would require his welcomed return and Charles began working with his Dad on the ranch.  In August 1971, Charles & Jackie would welcome their first child, a daughter, Kortnie.  A year later, August 1972, their son, Derek Lavelle, would join the family.  It would only be a few years until his three little “Charlie’s Angels” would arrive, Kami in 1976, Kaci in 1977 and Kali (his little “Bud”) in 1979.  Charles worked hard every day, sun-up to sun-down.  He never complained, never took a sick day, never put things off.  He was loyal and compassionate, witty and intelligent.  He strived to instill these qualities in his kids, as well as found time every fall to take just them camping (Jackie’s vacation).  Charles supported every activity and endeavor his kids and Jackie wanted to try or do.

Charles never hesitated to tell people that in addition to having four daughters, he also had four amazing sons-in-law.  Another one of his greatest joys was his grandkids, Reece, Isaac, Payton, Kale, Haley, Tyler, Carson, Annika, Mylie, Maggie, Coleman and Kamryn.  Although Charles wasn’t big on technology, he sure did appreciate the opportunity to watch his grandkids compete in athletic events, 4-H contests and other activities through pictures, videos and streaming.

An unexpected blessing in his life was Monte Spiering moving to Horse Flat.  Charles was so grateful to Monte for his partnership and friendship over these last fifteen years.

Charles will be remembered for his quick wit, his unfiltered honesty and the example he set for his family.  Charles was preceded in death by his father, Elmo, his mother, Clara, his brother, Lavelle and brother in-law, Bill.  He is survived by his wife of fifty-one years, Jackie, his children, Kortnie (Jim), Derek (Kim), Kami (Scott), Kaci (Jeff) and Kali (Jarrod), his sisters Deanna and Delma, his twelve grandkids and numerous cousins, nieces and nephews.

To send flowers to the family or plant a tree in memory of Charles Edwards, please visit Tribute Store