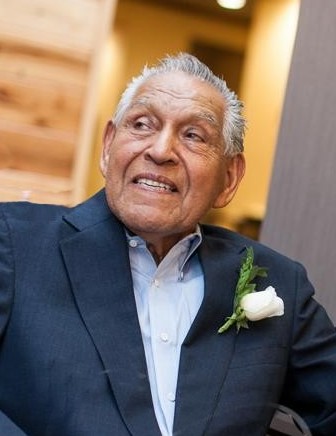 John Joaquin Jaramillo, 96, passed peacefully from this earth on Monday, March 1, 2021, in the presence of loved ones in Ontario. He was laid to rest at Sunset Cemetery on Saturday, March 6, 2021, in a private ceremony. A celebration of life to honor John will be announced later this year.

John was born Christmas Day 1924 in Vale, Oregon, to James and Rita Jaramillo. As the second eldest of 13 children, he was lovingly regarded as a mentor, advisor, and protector. Growing up during the Great Depression, he contributed in small ways to help his family earn extra money. Later, after graduating from Vale Union High School in 1942, he worked on his family’s ranch near Harper where they raised cattle and farmed sugar beets. He remained a trusted confidant to his entire family throughout those farming years in Harper and later near Cairo Junction.

In March 1949, John met his future wife, Andrea, when her family arrived in Harper to work for John’s parents. Their courtship was said to involve John cultivating the beet fields by tractor so precisely, it spared Andrea much of the necessary manual labor. The approach worked. The couple eventually married in 1954 and settled near Ontario where John continued farming.

John opened up Casa Jaramillo Mexican Restaurant in 1967 in the converted space of a former motorcycle shop. Over the years, he demonstrated a remarkable work ethic despite troubling back pain. He remained involved with the restaurant well into his 80s. His son, Ron, and daughter-in-law, Lucy, continue what is now a 54-year legacy.

John loved traveling with his wife, especially to Mexico, and was always ready for the next adventure. He was a big believer that every excursion provided a deeper appreciation and understanding of their shared culture.

In his later years, John cherished simple pleasures like conversation over a glass of red wine or just spending time manicuring his yard at home.

His spiritual strength was his cornerstone, and his faith remained a guiding presence throughout his life. He and Andrea were long-time parishioners at Blessed Sacrament Church, where they contributed regularly to events and causes.

If you knew John well, you knew it was not uncommon for him to impart some wisdom, insightfulness, or encouragement in the lives of those he touched. Sometimes the message he conveyed was easy, sometimes it was terse, but always with love in his heart.

John is survived by three sisters, one brother, seven children (and their spouses), 11 grandchildren, and 3 great-grandchildren. A special acknowledgement goes out to Leonor Sanchez who lovingly cared for John these last few years.

The family requests that you consider making a charitable donation to the Alzheimer’s Association in John’s honor.

To send flowers to the family or plant a tree in memory of John Jaramillo, please visit Tribute Store