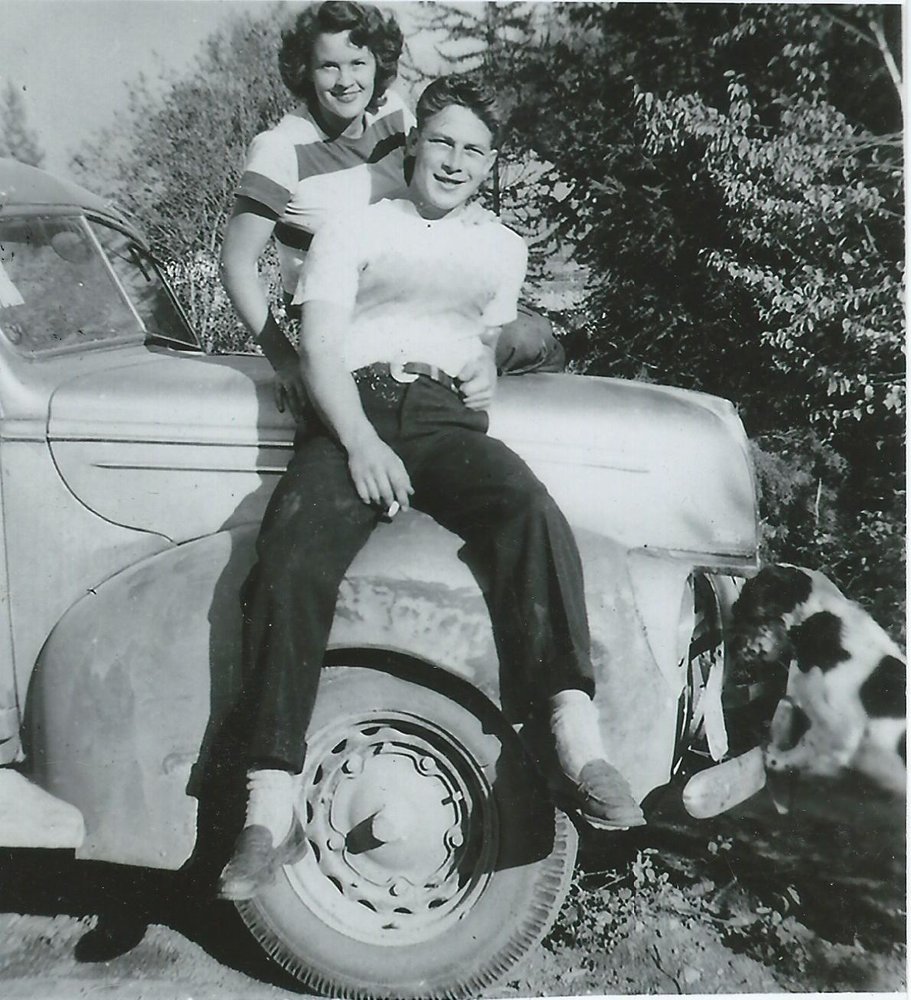 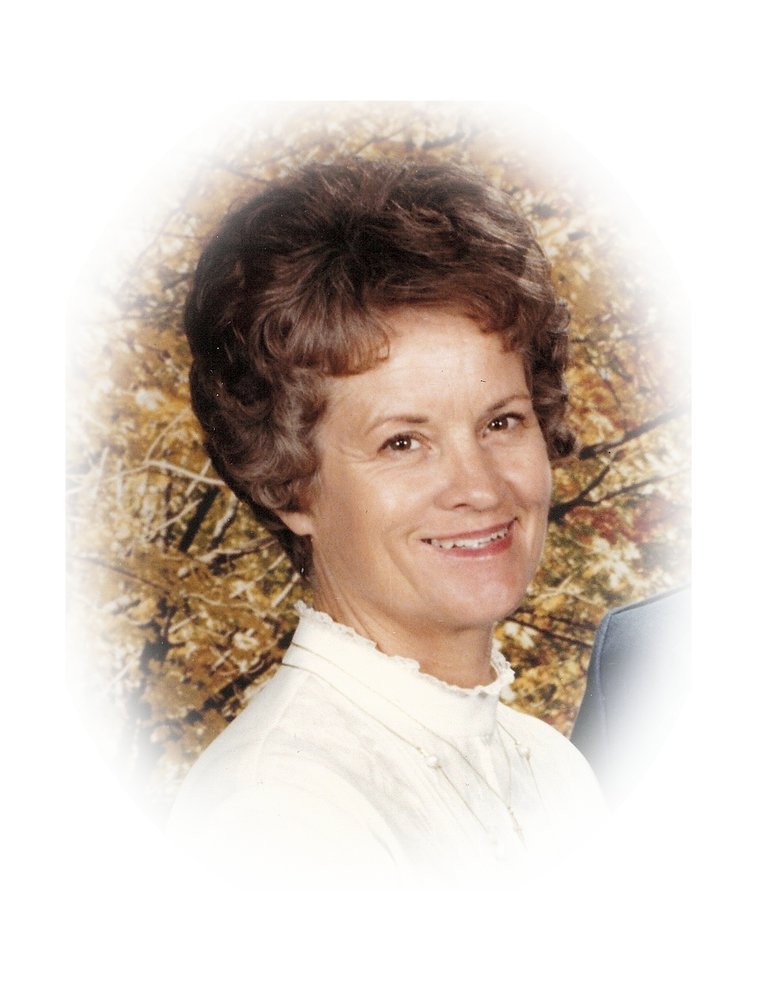 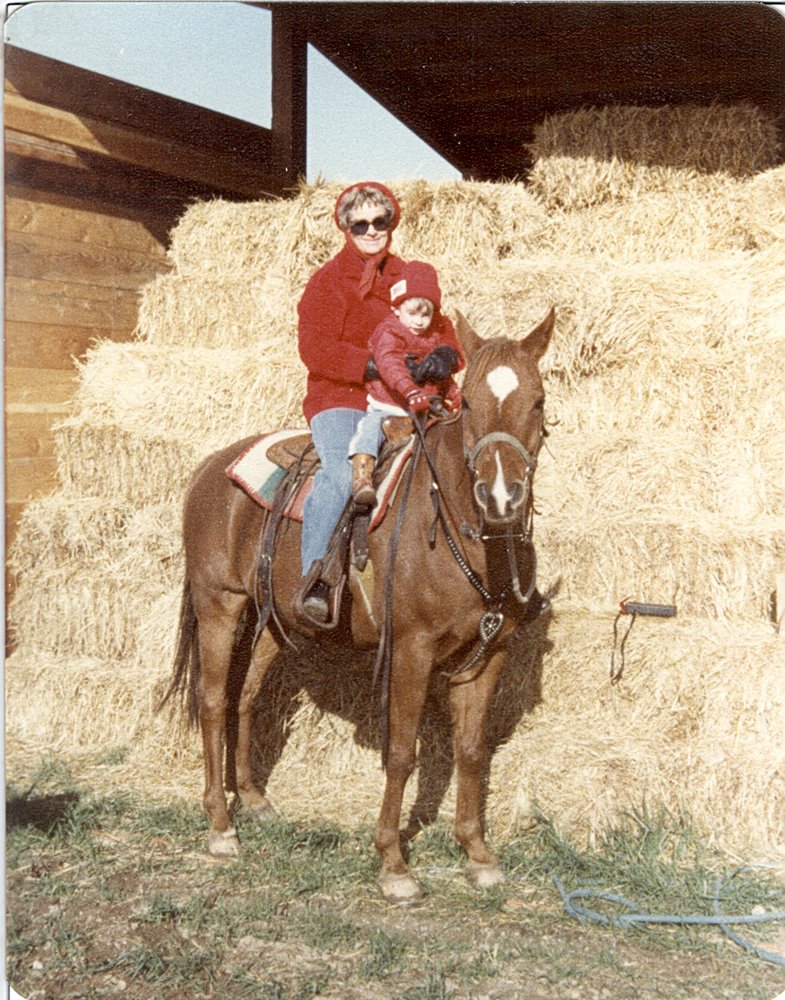 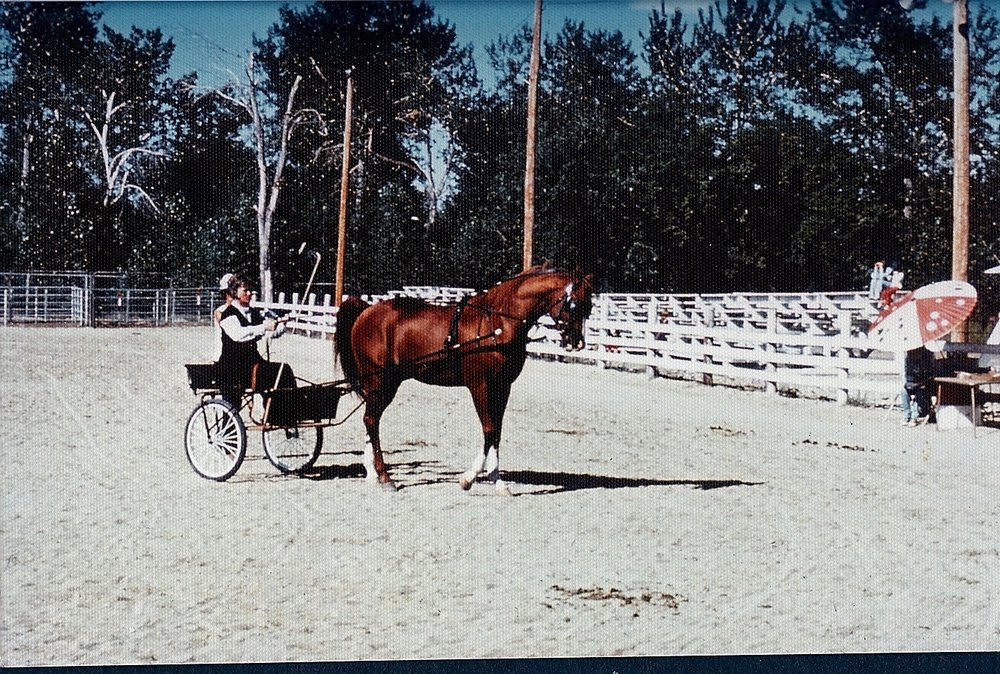 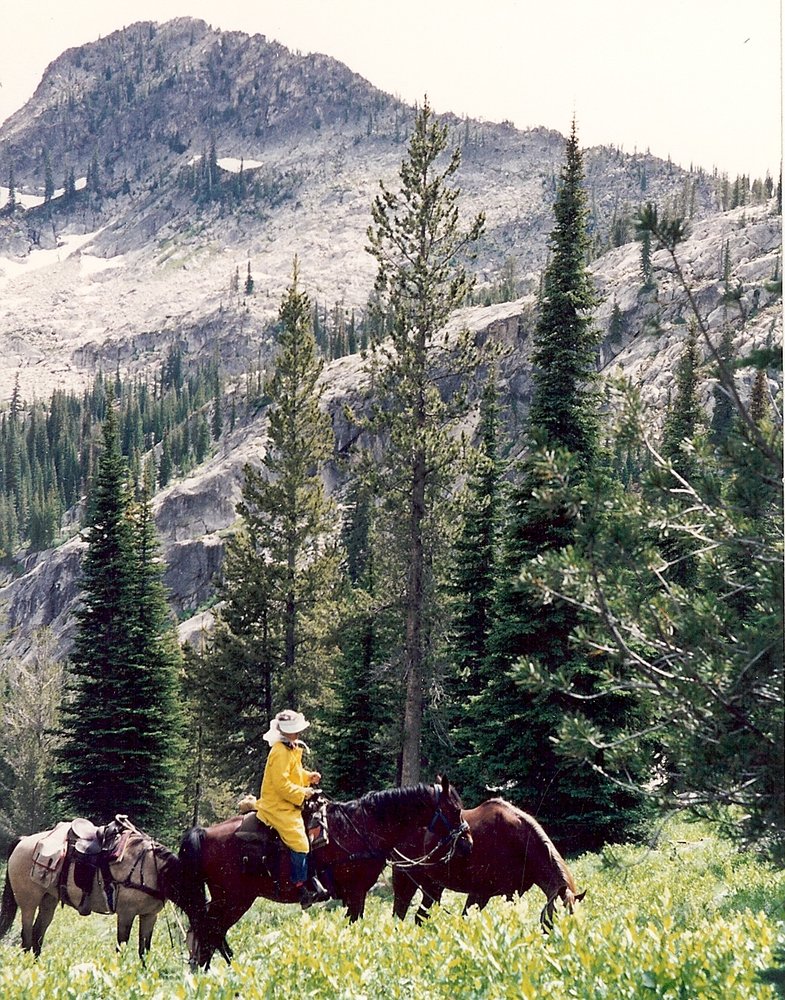 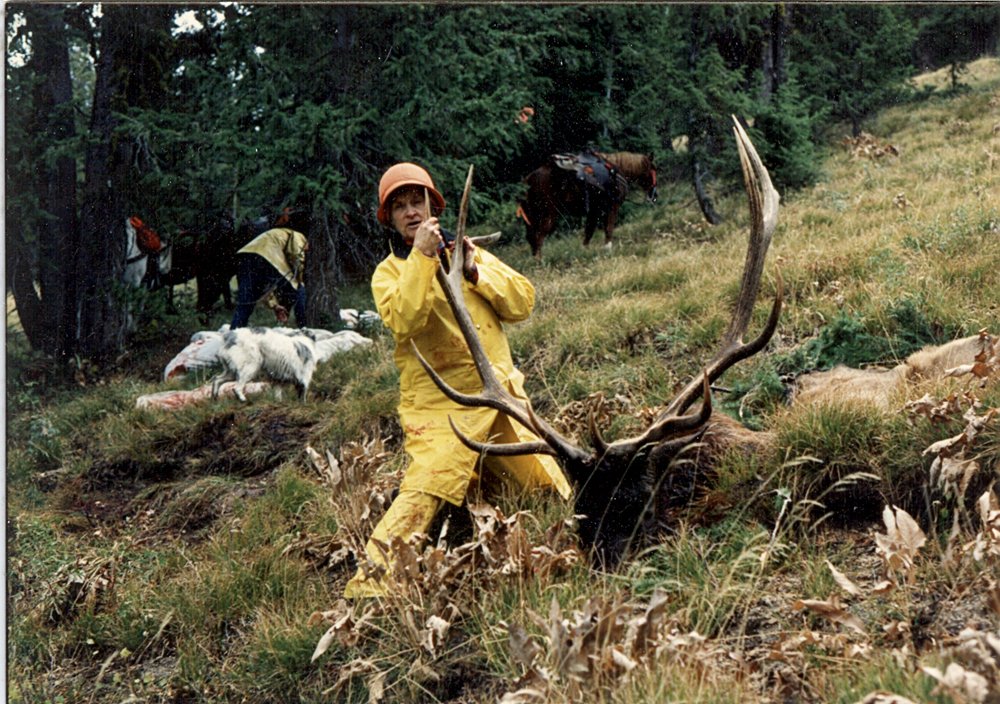 Lillie Slifka Hall   (April 14, 1930 to December 7, 2020) was born in Torrington, Wyoming, the 3rd daughter of Roy and Elsie York. She was named Lillie Adele York but her family called her "Pete". She and her two older sisters, Lavonne and Lois spent their early years on a ranch near Lance Creek in Eastern Wyoming, 26 miles from town. The winters were tough, and the Depression conditions persuaded the family to move to Idaho where they were told the climate was better. They bought a ranch 12 miles West of Cambridge, Idaho on Mill Creek at the end of a wagon road. This wagon road is now highway 71. Lillie started first grade at the Pine Grove School on Seid Creek. She and her sisters rode horses, walked, or rode the horse drawn "school bus"  4 miles to the one room school for 2 years.

In 1939 the family relocated to a ranch in Cow Valley, near Brogan in Eastern Oregon. It was 4 miles horseback to this school too. Lillie loved horses, so this mode of transportation was never a problem for her.

In 1943, during the war years, ranch help was hard to find, so Lillie, at age 13 helped work their farm with draft horses. She always prefered working outdoors. She mowed hay with a sickle bar, raked with a dump rake dodging rattlesnakes, and helped stack loose hay. She also worked on neighboring ranches where she stayed during summer harvest , working their horses. Her passion for horses started very young in her life, and embraced her to the end of her 90 years.

In 1944 the family relocated to Cascade, Idaho. Their farm was in the valley, and was eventually buried under the waters of Cascade Reservoir when the dam was built. At this time the family moved to town where the girls got to attend a "town school" for the first time. Lillie attended Cascade High School and formed some of her dearest memories there. She met Elden Slifka at school where she was a cheer leader and he was a football player. In 1948 they were married at the Methodist Church in Cascade. Elden called her "Dusty" all of his life. Lillie adored her in laws, Joe and Margaret Slifka.

When she was 18 Lillie cooked for a remote logging crew near Burgdorf, Idaho where she explored the mountains on her horse in her spare time.

They later moved to Ketchikan, Alaska where Elden worked on a logging operation. When they moved back to Boise their first child, Mark Steven Slifka was born January, 1955. In April, 1956  Trudy Lois Slifka was born.

The young family moved to Moscow, Idaho where Elden attended the University of Idaho and earned a degree as an Electrical Engineer. Lillie kept plenty busy caring for her babies.

The family moved to Bountiful, Utah where Elden worked for Utah Engineering Labs, but their roots in their beloved Idaho were calling. After 4 years in Utah, the family including horses and dogs moved to an acreage between Boise and Meridian. During this era, Lillie pursued her passion for horses and they began raising Arabian horses. It was not long before the horse operation needed room to expand, and the family moved to the end of South Cole road near Boise. They built a beautiful horse facility known as Desert Edge Arabians  where they raised, trained, and marketed horses for several years. They were involved with the Des Arab Horse Club from it's first meeting. Elden was the charter president. Their stallion, Las Trad was Lillies pride and joy. He won numerous championships at horse shows from 3 states competing in halter, western, english, and driving. He was ridden in parades as well as back country mountain trails, and was the Boise State Bronco Mascot at the football games. He sired 167 colts and lived to be 33.

Lillie kept herself very busy with the horses, irrigating, helping put up hay, and managing her family with two teenagers. She was dedicated to her faith and attended the Church of God of Prophecy with her kids for nearly 20 years.

One of her deepest passions was riding the wild country, exploring mountain lakes and hunting. If she was not at a horse event, she was on a pack trip with her family.  Lillie was a good packer, a great camp cook, and an excellent marksman.

In 1976, her world turned upside down when Elden died in his sleep from a heart attack at age 46. Both of her kids were in college, and she was alone for the first time in her life. Trudy came home to help with the ranch, and most of the horses were sold. Lillie kept her favorites to ride the trails with, and spent a lot of time riding with friends.

In 1980 Lillie married a childhood sweetheart, Gene Hall. They started raising cattle and  summered them in Cascade. There were now grandkids who spent memorable time with Lillie.

After about 20 years of cattle ranching, the cows and home place on Cole Road were sold, and they built a beautiful home in Midvale, Idaho where Lillie could be near her two kids. She brought her beloved horses and dogs with her, and helped her daughter Trudy and husband Johnny on their cattle ranch in Midvale. Lillie and Gene were also active members of Angel Camp Cowboy Church which Johnny and Trudy pastored in Midvale. She adored her son-in-law Johnny who called her "Lil". Lillie formed new friendships with other horse people in the area and enjoyed riding all the mountain country surrounding her.

In 2011, Gene passed away, and Lillie had to make some changes in her life. She continued riding, hunting, fishing, and participating in Cowboy Church for a few years until she was no longer able to live by herself. After she suffered a broken hip and needed advanced care, she was retired to Weiser Care of Cascadia were she formed new friendships and shared God's love to those around her.

She ended her earthly journey on December 7th, 2020.

Lillie had a very full and well spent life. It was not without heartache, but Lillie always overcame the obstacles in her life with God's help. She was multi-talented throughout her colorful life. She was a classy dresser and an exceptional seamstress; she made not only people apparel, but horse gear of all kinds that friends and family still use. Her quilts and afghans will be enjoyed by those who have them for many years to come. Though she said she did not like to cook, she was a fabulous cook, in the kitchen and on the campfire. She enjoyed music and was an avid reader. She was thoughtful, fair, honest, and fiercely loyal to those she loved. She passionately loved her horses and her dogs, her family and her Lord. The hole she created when she left this world will be mighty hard to fill.

Special thanks to each care-giver and staff at Salubria Center and Weiser Care of Cascadia who were so good to Lillie the later years of her life.

To send flowers to the family or plant a tree in memory of Lillie Hall, please visit Tribute Store