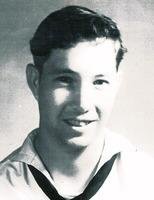 Donald Dean Patterson 87 of Weiser, Idaho went to be with the love of his life November 28, 2020. Don was born at Thousand Springs Ranch, Weiser July 21st 1933 to Emma (Sweet) and Charles Kelso. At the age of 4, Don was adopted by his mother's sister Becky and Charles Patterson, whom he thought of as mom and dad. He was raised in Emmett, Idaho. Don was a Korean War Veteran serving in the US Navy from 1951-1955. He was a cook on the USS Gardiner Bay seaplane tender. Don married his best friend and love of his life Noreen Francis in 1954 in Emmett, Idaho. Don began work at the Lime, Oregon cement plant in 1957 and moved his family to Huntington, Oregon before settling in Weiser in 1960 where they raised their 6 children. He loved the mountains, Oregon Coast, day trips, camping, fishing, fried oysters, tomatoes, and huckleberry pie. He is survived by his children Robert (Micki) Patterson, Laurie Patterson, Cindy Tucker, and Dwayne (Kari) Patterson, 6 grandchildren, 12 great grandchildren, his brother Jim Kelso, and many nieces and nephews. Don was proceeded in death by his wife Noreen, his mothers Emma and Becky, fathers Charles Kelso, Charles Patterson, his daughters Peggy Schuck, Cheri Patterson, 2 granddaughters, 7 brothers and 3 sisters. Graveside services will be at the Hillcrest Cemetery, Weiser, December 11th at 2:30pm. Viewing will be held same day at Thomason Funeral Home, 221 E. Court St. Weiser from 10:00am-12:00pm

To send flowers to the family or plant a tree in memory of Donald Patterson, please visit Tribute Store
Friday
11
December