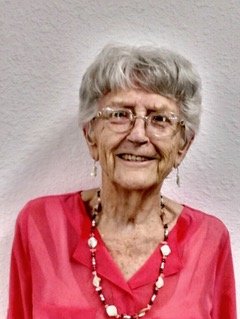 Marjorie Jean Brown Kerby was born March 21, 1929, the fourth of five children, to Vern and Jean Laird Brown. She was born at home in Weiser during the year that the banks failed; it was a hard time to raise a family. She didn’t realize they were poor as everyone seemed to be in the same situation. Marjorie’s childhood was wonderful filled with 15 cousins as built-in playmates, not much money, and the knowledge she was her dad’s favorite! She went to school at various places, graduating from Weiser High School in 1947.

When Marge was a freshman in high school her Dad purchased a sawmill outside of Indian Valley. It was a delight to spend the summers there and remained one of her best childhood memories. Her family and several cousins worked hard in the summers at the sawmill, but there was plenty of time for fishing and fun. They enjoyed lots of company in this beautiful setting.

HomeEc was not a favorite class, nor memory. Marjorie’s Cooking class project involved a demonstration of how to make macaroni and cheese out of a box; and her mother and sister had to take apart her dress for the Sewing class, cut it down to size and put it back together correctly the night before it was due. She became an excellent cook and hostess, and could feed a crowd without batting an eye. She firmly believed, “If you can read, you can cook.” People loved to visit or stay in her home and having “company” was common. Marge enjoyed her sewing room and made many of her children’s clothing - even designing and making Jan’s wedding dress.

Marjorie Brown attended North Idaho College of Education in Lewiston, Idaho and met Lyle Kerby the third week of school. They spontaneously teamed up in a couples’ contest on the lawn in front of Talkington Hall with fellow collegiate - girls on the shoulders of boys - and won, of course! Lyle invited her out for dinner and they were married the following summer, modeling competitiveness and finishing well to their five children.

Their honeymoon to Yellowstone National Park continued for several weeks after they returned home, as they lived with Lyle’s parents on Cherry Lane Ranch while their near-by home was being prepared. Marge had never learned to cook; Lyle’s mother was an exceptional cook. The day came when their home was ready and it dawned on Marge for the first time that if they were going to eat she would have to cook it AND clean it up.

Marjorie and Lyle were active in Cottonwood Creek Community Church where they found much of their social and spiritual life. Musically gifted, Marjorie not only played the piano by ear but wrote music and Christmas programs for the children. New to the Bible, she was an enthusiastic teacher and learned alongside the kids she was teaching.

When Marjorie was 11 she discovered there was such a thing as a Public Library! Really? Anyone can take home an armload of books for free? An avid reader, her children and grandchildren have many memories of the books she read aloud. Her theory, taught to children and all visiting cousins, was that work should be done well but quickly in order to leave plenty of time for reading!

Marjorie moved back to Weiser with Lyle in 1972 and enjoyed life near her many relatives. She worked for 16 years at the Weiser Veterinary clinic and continued to serve others in Riverside Baptist Church. Visiting females in the nearby jail for weekly Bible studies was a highlight of hers for many years.

Marjorie always had time to play games; she introduced one of the family-favorites called Kick-the-Can; it was enjoyed regularly through the years at dusk during family gatherings, down through her great- grandchildren. I think the Weiser Police were even called in to the game one year when a player was creeping along a new neighbor’s house trying to stay out-of-sight.

Marjorie was greeted in heaven by her husband Lyle, and her grandson Kerby Cowles.

A family celebration of Marjorie’s life was held. Cards, memories of Marjorie, or stories of her impact on your life would be a treat for her family to read. Please mail to Jan Cowles at PO Box 8206, Boise, ID 83707.

To send flowers to the family or plant a tree in memory of Marjorie Kerby, please visit Tribute Store