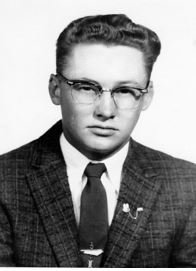 John Clain Mitchell, age 80, passed away Wednesday, October 14, 2020 at his home in Weiser, Idaho.  He was born on April 26, 1940 in Preston, Idaho.  His parents were Rulon Farnes Mitchell and Golda Olsen Mitchell.  He attended school in Preston and Montpelier, Idaho.  He loved hunting and fishing with his dad and his friends.  He graduated from the Montpelier High School in 1958.

He attended Idaho State University in Pocatello, Idaho before serving a mission in the Bavarian area of South Germany for the Church of Jesus Christ of Latter- Day Saints..  After returning from his mission, he completed his education at Idaho State University.  During the summer months he worked for the Bureau of Mines in the Frank Church Wilderness area.  He graduated in 1968 with a major in Geology and a minor in Chemistry.

Upon graduating, he worked as an exploration geologist for Atlas Mineral located in Denver,   Colorado.  He performed field work primarily in Utah, Arizona, Montana and Nevada.  In 1972 he began working at the Idaho Department of Water Resources in Boise, Idaho.  He initially was hired to design, plan and coordinate the exploration of geothermal resources in Idaho.  He was a speaker at local, state and regional meetings and symposiums.  Findings from his geothermal studies resulted in the successful drilling of the Capitol Mall #1 geothermal well in Boise in 1981.  When funding for the geothermal projects ended, he was transferred to the Dam Safety section of the Department.  He then worked in the Waste Disposal Injection Wells project. This was followed by coordinating the digitization of the extensive historical inventories and data bases of the department.  He retired from the department in 2002.

In 1973 he married Dorothy Jean Roberts in the Logan, Utah Temple.  Their three children, David, Karen and Paul were all born in Boise, Idaho.  He served in many callings in the Church but especially enjoyed working with the Cub Scouts and Boy Scouts.  He also developed an interest in Family History.   Hunting, fishing and reloading bullets were his lifelong hobbies.  His family enjoyed many camping trips in Utah, Idaho and Oregon after he purchased his parent’s truck and camper when his father died in 1979.  It was always interesting to ride with John as he would explain about the geology wherever we traveled.  He especially enjoyed camping in the Sawtooth area of Idaho.  He loved his family and enjoyed being with them for their soccer games, music concerts, recitals, gymnastics meets and Church activities.  Other family activities he enjoyed were Sunday dinners, Dutch oven cooking and watching John Wayne or other western movies together.

He and Dorothy purchased an acre of land from her brothers bordering the Snake River near Weiser, Idaho following his retirement in 2002.  All who visited there loved the beauty of the river and seeing the wildlife along its banks.   The grandchildren were impressed about viewing Oregon across the river from our home.  They also liked seeing the farming activities and riding  with John on his four- wheeler.

John is survived by his wife Dorothy, his children David Mitchell, Karen Mitchell Deitchler (Greg) & Paul Mitchell as well as his grandchildren Tawnya, Darren & Samantha Mitchell and Brooklyn & Aaron Deitchler. He is also survived by his brothers Dale (Grace) Callan & Rulon Nyles (JoRae) Mitchell along with  numerous Mitchell and Roberts nieces and nephews.  He was preceded in death by his parents and his sister Marilyn (Blaine) Kay.  Funeral Services will be held Saturday, October 31, 2020 at the Weiser Church of Jesus Christ of Latter Day Saints with interment to follow at Hillcrest Cemetery in Weiser.

To send flowers to the family or plant a tree in memory of John Mitchell, please visit Tribute Store