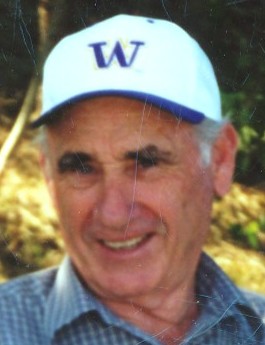 John Louis Echanis, 95, of Ontario, Oregon passed away peacefully Thursday, October 1, 2020 with his daughter at his side.

John, commonly known as “Johnny or Uncle John”, to friends and family was born March 26, 1925 to Ignacio “Jack” and Maria Echanis.  He was a father to Annette Echanis and loving grandfather to Hannah and Cole Cooper.

John was a lifelong resident of Ontario where he graduated high school and was an enthusiast of almost every organized sport.  John participated in basketball, baseball and track and served as the football team manager and captain of the basketball team.  Several years later, John was a member of the American Legion basketball team where they won a championship trophy, a basketball referee and organizer of youth athletic teams.

In 1943,  John joined the United States Army and served in WWII as a rifleman in the 129th Infantry Regiment of the 37th Division serving in New Caledonia, the Solomons and Luzon Island.  He was a recipient of the Purple Heart medal for wounds sustained in action in the Philipine Campaign and the Bronze Service Star for “heroic achievement”,

John worked in the beverage distributing business for a large portion of his life where he gained many friends throughout the Treasure Valley.  One of the first questions he asked when meeting a new person was “where are you from?”.  He usually knew either a friend or relative of every new acquaintance.  John owned a triplex in Ontario and enjoyed tinkering with irrigation systems and home repairs.  He enjoyed traveling to visit his daughter and her family as they moved around the country.  The highlight of his travels was a trip to Spain to visit the Basque country where his parents were born and raised, as the Basque heritage is a fundamental aspect of life for the Echanis family.

He is survived by his daughter Annette and her husband Matt Cooper of Pennsylvania and California; granddaughter, Hannah Cooper, VMD of Kennewick, WA; grandson, Cole Cooper of Seattle, WA; his beloved sister, Josephine Keim of Ontario, OR; Timothy and Tamara Cables and numerous nieces and nephews.

The family would like to extend a heartfelt word of thanks to Josephine Keim and her family for helping John in many ways throughout his life; to the loving caregivers at Dorian Place and Horizon Hospice for allowing John to live with dignity in the final years of his life, and to the many friends he has made throughout the valley who made his life complete.

Graveside services will be held at Sunset Cemetery in Ontario on October 23rd at 1:00 P.M. Due to the current restrictions on gatherings, Attendance will be limited to family.

In lieu of flowers, the family suggests donations be made in his honor to the National Alzheimer's Association.

To send flowers to the family or plant a tree in memory of John Echanis, please visit Tribute Store
Friday
23
October