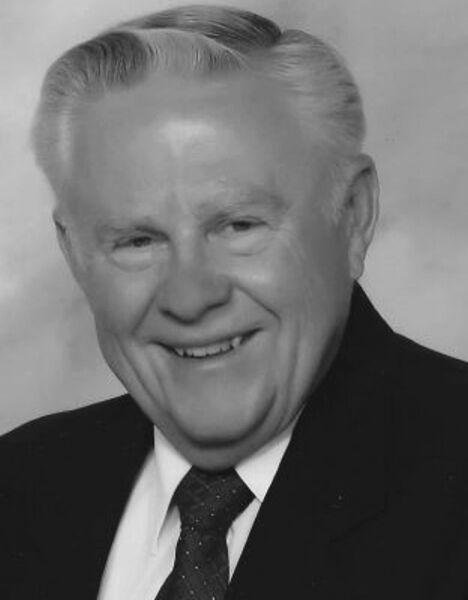 David Carlin Eldredge passed away peacefully on Thursday, August 6, 2020 in his home. He was born October 6, 1936 in Rupert, Idaho, to Clarence Lashbrook Eldredge and Rosie Ellen Simpson. For three summers, he worked at the Chamberlain Basin, maintaining fire trails and working as a fire lookout for the BLM. He graduated from Middleton High School, where he served as student body president, then attended Brigham Young University. Soon after, he served in the British Mission for the Church of Jesus Christ of Latter-day Saints, sharing the gospel in Southern England and Ireland.

In 1959, David married Karen Reece in the Salt Lake Temple. The couple bought their first home in Twin Falls, Idaho, and welcomed two children, Shauna and David. He worked for Blacker’s Appliance and Furniture before moving the family to Ontario, Oregon in 1963 to open his own store, Eldredge Furniture. There, Wayne, Amy, Michael, and Nancy were born.

As Chamber of Commerce president and a member of the Lion’s Club, David was active in his community. He also served in many positions at church, including counselor in the bishopric, member of the high council in the Nyssa Stake, and Elder’s Quorum President. He especially enjoyed his role as a temple worker in the Boise Idaho Temple.

David will be remembered for his love of fishing, boating, water skiing, snow skiing, and gardening. He was an extremely hard worker and cared deeply for his family. Many were touched by his kindness, generosity, and clever sense of humor.

The family would like to thank Travis, Lisa, Alicia, and Korina with Encompass Health Hospice for the excellent care they provided. Funeral Arrangements and Services by Lienkaemper Chapel, Ontario.

To send flowers to the family or plant a tree in memory of David Eldredge, please visit Tribute Store
Wednesday
12
August