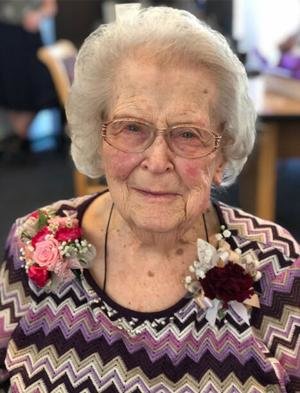 Mary was born on November 8, 1919 in Seattle, Washington, the youngest of seven children born to Nicholas and Maud Schmitt née Flynn. Her father had immigrated to America from Alsace-Lorraine, and her mother from England. Mary attended St. Patrick’s Grammar School, and graduated from Seattle’s Roosevelt High School. After completing business school, she worked as an executive assistant for Warner Brothers’ Seattle-based cinema distribution company. During WWII, she first met her husband, Montana native Victor Haburchak, at a USO dance while he was training at Fort Lewis. The two corresponded during the war, and married in 1947 at St. Benedict’s Catholic Church, Seattle, Washington. The newlyweds took up residence in Butte, Montana where their first two children were born. They later moved to Nyssa on July 4, 1950 where they had purchased a Marshall Wells hardware store. During the ensuing years Mary served as accountant for the business, which her husband managed, until they retired and sold the business to daughter and son-in-law Mary and Dick Kline. After retirement, Mary and Victor enjoyed traveling to the 50 states, Canada, and to Europe, including a trip to visit Victor’s cousins and aunts in what is now Slovakia, and a niece and her husband stationed in Germany with the U.S. Air Force.

Over the years, Mary was actively involved in community service. A committed member of her parish, Mary served in many offices including being President and Treasurer of the Altar Society, a member of the Parish Council, and a religious education teacher for some 10 years. In addition, she served as a Cub Scout and Girl Scout leader, and an officer in the American Legion Auxiliary, where she supported the Oregon Girls State program. Her lifelong advocacy for quality education of youth in the Nyssa Public Schools led her to involvement in the Parent Teacher Association, serving on the Nyssa Library Board, and being a literacy instructor for youth. She was honored to have received an award from the Nyssa Chamber of Commerce and, along with her husband Victor, to have once been an honorary marshal for the Nyssa Christmas Parade.

After her husband’s death in 2011, Mary moved to Nyssa Gardens where she has spent several happy years. Her family and friends from near and far honored her with a joyous celebration for her 100th birthday in November, 2019. Now, at this time, Mary’s family would like to extend sincere gratitude to the staff, residents, and volunteers of Nyssa Gardens, to Father Anish Philip, and to the other priests and extraordinary communion ministers of St. Bridget’s Parish for their ongoing loving care for their mother during her happy time of residence at Nyssa Gardens.

Given the current COVID-19 restrictions, graveside services will be held for immediate family only at Hilltop Memorial Cemetery in Nyssa, Oregon under the direction of St. Bridget’s Catholic Church, Tuesday, August 4th at 10 am. A Memorial Service will be announced at a future date. May your servant Mary Louise Haburchak Rest in Peace.

In lieu of flowers, the family requests that those who wish contribute donations in Mary’s memory to one of the following: St. Bridget Catholic Church, 504 Locust Avenue, Nyssa, OR 97913-3235; or to the American Diabetes Association, PO Box 1834, Merrifield, VA 22116-8034. Donations may also be left for either of the above at Lienkaemper Chapel, PO Box 970 Ontario, OR 97914-0970. Arrangements under the direction of Lienkaemper Chapel, Nyssa

To send flowers to the family or plant a tree in memory of Mary Haburchak, please visit Tribute Store