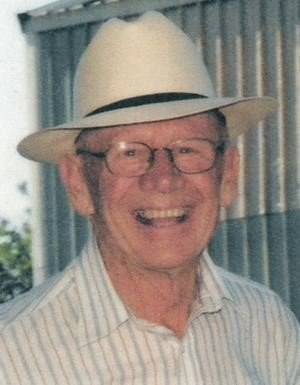 Leroy was born September 15, 1926 in Wichita Falls, Texas, to Austin and Myrtle Barton. He was raised in Butler, Oklahoma, until he was 16 when the family relocated to Los Angeles, California.

He enlisted in the Navy just prior to his 18th birthday in 1944. He was assigned to the USS Bon Homme Richard and headed to the Pacific to protect Hawaii and the Philippines.

Following his discharge from the service he relocated to Vale and joined his family where he learned the trade of shoe repair. He purchased his own shop in Nyssa, Oregon and lived there from 1949 to 1952. While in Nyssa, he met the love of his life, Irene Bibbey. They were married July 1, 1951 in Nyssa and moved to Vale in 1952. Together they operated the Vale Shoe Shop until they retired in 1987.

People will tell you what a nice, friendly and witty person he was. He was known for pulling tricks and telling jokes and stories. If you were from Vale or the surrounding area you knew about the Pencil on a String or the Mongoose and various other puzzles. He loved to play Pinochle and traveled to Harper and Willowcreek to play with friends. He was honored in 1995 to serve as the Grand Marshall of the Vale Rodeo.

He was a member of the Vale Christian Church, Masonic Lodge and the Vale Legion.

He was a loving, caring, supportive husband, father, grandfather and friend that will be greatly missed by all. He always had a smile and a story to tell and once you met him he would know you from then on. He always took time for everyone.

Memorial Services will be held at Valley View Cemetery in Vale on Friday, May 22, 2020, at 1 p.m. Please remember to practice social distancing.

Memorials may be made to the Vale Legion.

To send flowers to the family or plant a tree in memory of Austin Barton, please visit Tribute Store