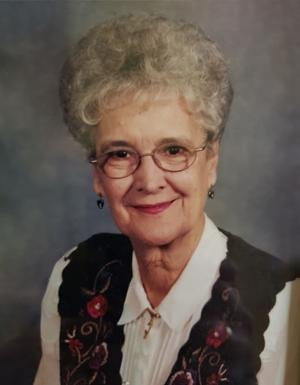 Mary Lou was born June 13, 1930 in Belleville, Kansas, the daughter of Leonard and Emily (Ferguson) Rightmeier. She was raised in Belleville, Kansas and graduated from Belleville High School in 1948. After marrying the love of her life, Bob Feasel, on August 25th, 1948, the newlyweds moved to Hays Kansas where she supported her husband through college. After Bob graduated college, they moved back to Belleville for a few years and in 1957, the couple moved to Ontario, Oregon where they both spent the remainder of their lives together raising two sons Gary Alan and L. Mark. Mary Lou and Bob were married for 66 years until his death in 2014.

Mary Lou worked at the U.S. Bank in Ontario for 31 years. After her retirement from the bank in 1988, Mary Lou and Bob spent the majority of their golden years traveling, camping, playing Bridge with friends, visiting family, and most enjoyably spending time with their grandchildren. Mary Lou was very active in the community of Ontario. She served on the Malheur County Library Board for 12 years, Presbyterian nursing home board for several years, and was a long standing member of the PEO organization. Mary Lou was also an accomplished musician and played the piano/organ for the Presbyterian Church in Ontario for nearly 50 years. Her beautiful piano playing continued at Sunset Estates Memory Care Center even though she was losing her battle with Alzheimer’s disease.

Mary Lou is survived by her two sons, Gary of Garden City, ID and Mark (Cindy) of Forks, WA, three grandchildren and 6 great-grandchildren. She was preceded in death by her husband, Robert (Bob) Feasel, parents, Leonard and Emily Rightmeier, sisters Mona Lynne, Shirley, and brother Larry.

Due to unforeseen circumstances, a memorial will be announced at a later date. Arrangements by Lienkaemper Chapel, Ontario.