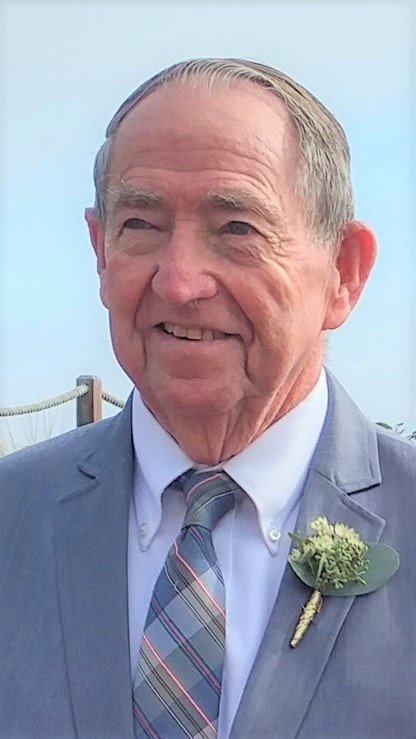 Benjamin Lee Kerfoot passed away February 23, 2020 surrounded by his family. Ben was born in Parma, Idaho on February 10, 1933 the last of 12 to Horace and Bertha Kerfoot. He grew up on the family farm in Notus, Idaho.

He was active in football, basketball, and baseball at Notus high school as well as getting into mischief with his older brothers. Ben learned to play basketball using the metal rim from a peach basket and that same rim hangs in his basement to this day.  After graduating from Notus High school Ben received a basketball scholarship to College of Idaho. Ben was well known for combining his football kicking skills and basketball prowess for a dropkick shot from half court which was about 90% accurate.

Ben spent three years at College of Idaho and then joined the army during the Korean War. He was eventually sent to Europe where on his first day in France was asked to play on the army basketball team and had the privilege of touring Europe playing basketball.

Ben returned to College of Idaho for his last year and to marry the love of his life Joan Jensen. They started their life together at Fruitland where Ben taught six different classes, was the head boys’ basketball and baseball coach and assisted with all the other sports. The summers in between he spent getting his administration degree at University of Idaho for the next four years.  After five years they moved to Caldwell, Idaho where Ben was a guidance counselor and head boys basketball coach and assistant football coach at Vallivue High School.

Ben returned to Fruitland in 1968 as superintendent of schools. He joined the Elks club and the Lions Club. He also became active in coaching Little League football and eventually returned to high school coaching with his daughter’s girls’ basketball team. Ben believed extracurricular activities were an important part of education whether it was sports, band, drama or clubs. He was a long time board member and President of the IHSAA and served a term on the National Federation of State Activities Associations. He loved supporting Fruitland and College of Idaho athletics and one of his greatest honors was having the Fruitland sports complex named after him.

Ben spent many hours playing bridge and pinochle with friends, or any card game for that matter. Throughout his life he loved to fish and hunt. He spent several summers salmon fishing at Campbell River, Canada and his later years fishing the local reservoirs with his good friend Lloyd Johnson. Some of his happiest memories were up at the Sturgill Creek Ranch hunting deer, elk and birds with his boys, nephews and close friends.

He truly lived life to the fullest and in retirement was able to travel the world with his wife Joan and was often joined by brother and sister-in-law Pat and Arvin Spofford. With the many places he visited he never seemed to be happier than sitting in the stands or on the field watching his grandchildren compete in their respective sporting events.

Though his family and friends mourn his loss, he is surely happy with his bird’s eye view.

Ben was succeeded in death by his five brothers and six sisters. He is survived by Joan  his loving wife of 64 years, children John (Holly) Kerfoot, Perry (Sue) Kerfoot and Patti (John) Fagen; six grandchildren – Ben, Samantha, Tali, Nikolas, Walter and Jonathon and three great grandchildren and one on the way.

Celebration of life will be held on March 8, 2020 at the Fruitland High School gymnasium at 2 PM followed by a reception at the Fruitland Elementary lunch room. Arrangements and Services are under the direction of Thomason Funeral Home.