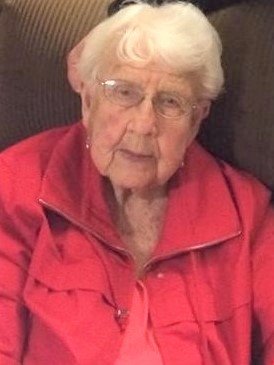 Erma Victorine Johnson, after spending 101 remarkable years on this planet passed away July 22, 2019, in Creswell, Oregon.

Erma was born in Rye Valley Oregon on February 6, 1918, as part of a large pioneer family produced by her parents Tona Justus and Mary Kimbrough Justus, She grew up with three brothers:  Bud, Ben, and Alva.  Her four sisters were: Alta, Hazel, Babe and Bessie. Her parents and all her siblings preceded her in death.

Erma attended school in a one-room schoolhouse in Rye Valley and rode her horse to school each day.  She often mentioned how exciting it was when the first radio came to Rye Valley, and that they would travel to the neighbor’s house to hear this new invention.

Erma and her family left Rye Valley and moved to Vale, Oregon, when Erma was a teenager. Eventually, she met Everett James “Buzz” Johnson, and married him on June 1, 1938.  They lived for many years on a small ranch in the Sandhollow area near Vale, before Buzz passed away in 1990.  Erma worked as a school janitor and a Malheur County jailer during some of those years

After the death of her husband, Erma moved to Ontario, Oregon, where she became an active part of the Ontario Senior Center.  She greatly loved attending the dances and social events there.  At this time of her life she also had the opportunity to travel to Mexico and the Southwestern United States, which she greatly enjoyed.  In her later years she lived in Caldwell, Idaho, and Creswell, Oregon.

Graveside services will be held at Valley View Cemetery in Vale, Oregon on Friday, August 2, at 10 a.m.  A memorial dinner and celebration will follow at 11:30am at the First Christian Church in Vale Oregon. In lieu of flowers, the family is requesting that donations be made to the Ontario Senior Center.

Services are under the direction of Lienkaemper Chapel, Vale.

To send flowers to the family or plant a tree in memory of Erma Johnson, please visit Tribute Store
Friday
2
August