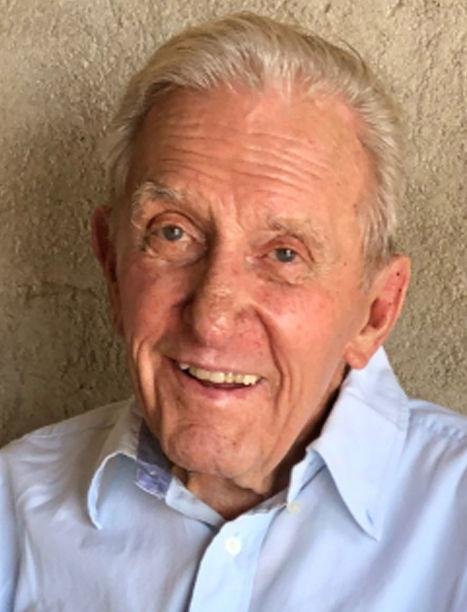 Owen was born September 19, 1931, in Brigham City, Utah to Bernice Bowden Froerer and Owen Joseph Froerer. The family later moved to Vale, Oregon and Owen completed high school in Vale as did his siblings Ruth Froerer Chandler, Carol Froerer Carlson, and Ron Froerer. As Owen was preparing to serve a mission for his church, he was drafted into the Army and served in the Korean War. The day his transport boat landed in Korea, The Korean Armistice Agreement was signed – what a blessing. He served to transport troops, equipment, and supplies around the Korean peninsula for the next 18 months as active combat decreased.

Returning from Korea, he married Colleen Bybee November 28, 1954, in the Salt Lake LDS Temple. Owen began a long farming career initially working for his Father-in-law, Shay Bybee and renting some land that he farmed himself. He also started a family that grew to include Randy, Craig, Robin, and Sharla. His young life centered on raising a family and growing his farming operation. Activities included exploring the Owyhee desert and the Eagle Cap Mountains with his young family, his friends, and their young families.

Owen obtained his private pilot license, and this expanded his exploration with family and friends. Several trips to the Oregon Coast, Mexico, and the mountains of Idaho were made with his plane in between the work of farming. As a child, he used horses to farm and always had a fondness for riding and packing horses. He loved horse packing trips to destinations in the Eagle Cap Mountains of Oregon, the Imnaha River, and Hells Canyon and did this often. To celebrate his eightieth birthday, he rode a horse into Hells Canyon several miles to Elk camp and hunted with his son, daughter, a son-in-law, and two grandsons for several days before riding back out to get back to harvest duties. To be around him on these trips, one could tell he had a great appreciation of the beauty of nature and the greatness of God’s creation.

His favorite activity was to work on the farm with his family. As the family grew, the farm operation grew to include Froerer Farms, Ida-Spear Packing, and Owyhee Produce. The farm and packing operations include a son, two daughters, three grandsons, numerous long-term employees, and his first partner Colleen to steady and glue the whole group together.

Owen and Colleen first traveled to Mexico in 1969. This trip spawned a great appreciation for the history of that country and the great civilizations that lived there centuries ago as well as the customs and practices of the people today. He returned to Mexico over thirty times with family and friends to explore the ancient ruins and majesty of the countryside of Mexico and Central America. In 2019 at the age of 87, he traveled with over twenty-four family members to see some of the archeological sites in Mexico, Guatemala, Honduras, and Belize.

Family was one of Owen’s treasures of life. Whether it was a trip to explore Mexico, a horse packing trip to explore the Eagle Cap Mountains, or a trip to town for dinner, the trip was not complete if some family members were not included. Another treasure of his life was the Gospel of Jesus Christ. He shared that Gospel with acquaintances and strangers alike. As a member of the Church of Jesus Christ of Latter-Day Saints he served in a Bishopric, the Stake High Council, Ward Missionary, and several teaching positions throughout his life. His favorite activity was sharing the Gospel of Jesus Christ.

To send flowers to the family or plant a tree in memory of Owen Froerer, please visit Tribute Store
Monday
20
May