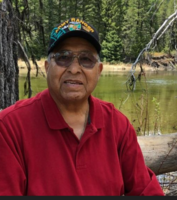 James was a generous man who took extreme pride in his daughters and grandchildren. He enjoyed hunting, fishing, gardening and wood working. During his years living in Weiser, he and his wife attended St. Agnes Catholic Church. He was also a member of the Knights of Columbus and the Lion's club. James traveled the world as a member of the US Air Force and US Army, from which he retired after 26 years of service. He was the recipient of the Bronze Star with Valor, two Army Commendation Medals, Army Achievement Medal, Air Force Good Conduct Medal, National Defense Service Medal, Army Service Ribbon, Overseas Service Ribbon and the Vietnam Service Medal with one Silver and one Bronze Service Stars, Republic of Vietnam Campaign Medal, Combat Infantryman Badge, Parachutist Badge, Vietnam Cross of Gallantry and Air Force Longevity Service Award.