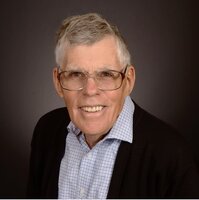 “Let it be said of me that I never met a cow I didn’t like, except for that old rip #10”.  ~Timothy Michael Smith

Tim Smith, husband, father, grandfather, animal lover, cowboy-at-heart, and an all-around wonderful man passed away at his home in Ontario, Oregon on July 11, 2022, at the age of 81 after a run-in with liver cancer.

Tim was born in Salem, Oregon on May 21, 1941, and later moved with his parents George and Lucille Smith to Redding, California where he spent most of his formative years.  It was also there that he became a protective and kind (usually) older brother to two sisters.  Tim was a devastatingly handsome boy who was eager most of the time, smart all of the time, shy on occasion, and quick-witted when it counted.  He was an excellent student and was active in Future Farmers of America and a leader in student government.  Tim first discovered ranch life while in high school but cowboying would have to wait. Tim graduated from Enterprise High School in 1959 and joined the U.S. Army in October of that same year.  He served in Korea, Japan, and Germany before returning home in 1962 to attend college at Cal Poly San Luis Obispo.  He studied Animal Husbandry there and also took up human husbandry when he met his first wife Paula Nuoffer on the first day of school.  Apparently, she was taken in by his tall stature, ready smile, and working car.  Tim and Paula married in 1963.  After graduating with a bachelor's degree, he continued on to the University of Nevada at Reno where he earned both a Master's Degree in Animal Science/Nutrition and the title of father with the birth of his daughter Heidi.  In the years that followed, Tim worked in various agriculturally related positions from managing breeding operations and ranching to farm credit and appraising.  No matter where he worked, Tim had a border collie by his side and a good horse not far away. His professions took him from Oregon to Oklahoma, California to Nevada, and back again before he finally settled along the Malheur River in the communities of Vale, Harper, and Ontario.  Along the way, Tim divorced and remarried twice - finally settling down for just short of 39 years with the love of his life, Nona Rae Mackenzie whom he married on September 8, 1984.  In addition to his daughter Heidi Smith (Evans), Tim also considered himself quite lucky to be a bonus dad to Mike Heidemann, Julie Heidemann (Saxton), and Lori Heidemann (Bennett) as well as David, Mark, and Jim Mackenzie and he was a proud grandpa to a good many grandchildren and great-grandchildren.

Tim is survived by his wife Nona, his sisters Jill Smith (Shamoon) and Pamela Smith (Buick), all of his children and grandchildren, nieces and nephews, and a community who will remember him fondly as a man who was hard-working most of the time, honest all of the time, humorous on occasion and compassionate when it counted.  He was loved well and will be greatly missed.

Services will be held on Friday, July 15, 2022, at 2:30p at Saint Patrick’s Catholic Church, 690 A Street W, Vale, OR 97918.  (Rosary will be held prior to 2:00p.)  Interment at Valley View Cemetery in Vale. Celebration of life to follow at Tim and Nona’s home. In lieu of flowers, please consider planting a tree or flowers in Tim’s memory.  He loved to see things grow.  We wish to express our deep gratitude to Heart and Home Hospice for taking such wonderful care of our family during this difficult time.