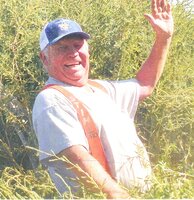 Samuel Henry Warrington, 72, of Ontario, Oregon lost his battle to cancer Thursday April 28th, 2022, at his home with family around him.

Sam was born on July 23rd, 1949, in Ontario, the 4th son of George and Helen Warrington.  His parents had recently relocated to Ontario from Baker City just months prior to his birth.  Sam attended Ontario schools and graduated with the class of 1967.  He married Teresa Ellen Gough, the daughter of Theron and Margaret Gough of Parma, Idaho on May 31, 1980.  They would have been celebrating 42 years together this year.  They had two children together – Andrew Keegan and Alyssa Meagan.

Sam worked many jobs over the years, the main one being in construction.  He enjoyed working with his nieces the last several years prior to retirement at Warrington Irrigation.  Sam loved the outdoors.  He spent his falls hunting deer and elk and chucker, never missing a year.  Sam took multiple trips to Alaska for moose hunting and fishing with his childhood friend Neb Schmitt.  He looked forward to fishing in the Bahamas every spring with his cousins and crabbing in the winter at the coast with family and friends.  Sam loved to socialize with his family and friends, rarely having an evening where someone wasn’t stopping by to have a cold one and shoot the breeze.

Sam was proceeded in death by his parents George and Helen, his sister Janet (Hintz) and brother Kenneth.

The family would like to recognize all of our families and very close friends for their love and support.