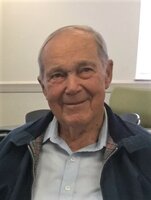 Born May 6, 1930, in Kimberly Idaho to Edith Matilda Davis and John Emery Cameron. Emery had an older sister Marjorie, an older brother Keith and at the age of 3 years old a younger sister named Fern was added to the family. According to Emery they traded an old roan cow for his new little sister.

Emery and his family lived in Hollister Idaho until 1938 when they bought a farm south of Adrian in the Big Bend area. They arrived in September finding the farmhouse was rented out until March of 1939. With no choice they spent the first year in a 16’ square tent. They heated the tent with a wood stove burning sagebrush. The tent was set up most of the time in the Ridgeview area.

When Emery started school at the new home, he was in the 3rd grade and attended what was known as the Wade School. Emery said he either walked, rode a horse or a bicycle 2 miles to school. Upon graduation from the Wade School, he then attended Adrian High School graduating in 1948.

Emery had noticed that there were two new girls in high school Marjory and Joyce Jelinek. Marjory was 1 year behind him in school and graduated in 1949. Marjory LaVonne and Emery Earl were married January 14, 1950, at the Presbyterian Church in Adrian. They eventually moved to the original family farm south of Adrian in the Big Bend area and started a family. In 1965 Emery and his young family moved to the basement house which was south of Adrian west of the highway. The next move was to the farm next to the bridge south of Adrian in 1969 referred to as the Cowling place where they remained until moving to Ontario July of 2018.They were blessed with 4 children Ann Marie Cameron married to Mike Bell of Ontario, Richard G. Cameron married to Heidi Kennington of Ontario, Joy Lynn Cameron married to Bill Phelps of Adrian, and Tami Cameron of Ontario. There are 16 Grandchildren and 45 great Grandchildren. Emery was preceded in death by his parents, two sisters and a brother.

He was a farmer, cowboy, community minded citizen, a pilot, a master mechanic of all types of machines and motors both gas and diesel, he was a master of fixing it for anyone that knew him. It was very common to have 4 or 5 vehicles or machines sitting next to his shop waiting their turn to be fixed. I read a few pages of a journal from 1998 to 2001 and was amazed at the busy schedule he kept, going to homes or ditch banks fixing whatever needed attention.

Marjory and Emery were very involved in church activities. They became members of The Church of Jesus Christ of Latter-Day Saints March 26, 1960, and were sealed as a family March 15 1962 in the Idaho Falls Temple. While a member of the Owyhee ward Emery served as assistant finance clerk, an Executive Secretary, 2nd Counselor and 1 Counselor in 2 different bishoprics, and an Assistant in the High Priest quorum. Marjory and Emery served in the Boise Temple for several years. Marjory and Emery were the best examples of Home Teachers as they ministered to many individuals and families in the Owyhee community. Together they were always looking for ways to help and make people feel welcomed.

The funeral will be broadcast beginning at 9:00 AM and will conclude after dedication of the grave at the Parma Cemetery. Intermittent family pictures and music will play during certain periods while cameras are moved and also during the driving to the cemetery. Watch the livestream here:  https://inmemorial.us/memorial

In lieu of flowers you may donate to the following link in memory of Emery. The Church of Jesus of Latter-Day Saints Humanitarian services. https://donate.churchofjesuschrist.org/donattions/church/humanitarian-services/humanitarian-aid-fund?cde2=475-home&lang=eng

For your safety and others please wear a mask. If you are unable to wear a mask, please enjoy the livestream link from your home.