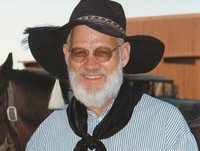 Jimmie Ray “Jim” Conner was born June 26, 1929, in Weiser, Idaho to Arthur and Sina Manser Conner.  His goal was to live to age 92.  He was able to accomplish that by celebrating June birthdays with friends, neighbors, and relatives on his 92nd.  He passed away July 3, 2021 peacefully at home with his wife Helen by his side.

The Conner family moved to Ontario, Oregon when he was 6 months old.  Jim attended Conklin Elementary School and graduated from Ontario High School in 1947.  He liked to tell folks about running to and from school through Arata Orchard and the swamp where there is nothing but houses today.

As a young man Jim was active in sports and FFA.  He was all-conference end in football and played basketball and ran track.  Besides showing beef animals he took part in district and state FFA events.  School was not his favorite activity, but he liked to work on his uncles’ farms and at Ontario Elevator also managed by an uncle.

After graduating he married his high-school sweetheart, Wilma May Pierson.  After 20 years of marriage, he and Wilma were divorced.

Three children were born to this union – Diana Lynn, Danny Lee, and Michael Dean.  They were an active family and spent time camping, boating, fishing, and water skiing.

On August 20, 1951 Jim went to work at Garrett Freight Lines.  They were purchased by ANR, and he worked for the two companies for 38 years.

On May 30, 1969 he married Helen Marie Dwelle in Reno, Nevada.  Jim and Helen lived their entire married life in Payette County, Idaho.  In May they celebrated 52 years together.  As Jim often said “It has been a wonderful life.”

Fall usually found Jim hunting deer and camping in one of his favorite places, Hells Canyon.  Jim and Helen shared good times there with sheepherders on the Wilson Ranch, also known as Kirkwood bar the Snake River.

Jim, Helen and some adventuresome friends packed up mules and burros and visited wilderness and primitive areas in Idaho, Oregon, and Montana.  They would hike, fish, and swim in high-mountain lakes and enjoy the fabulous scenery.

After retirement winters were spent at their winter home in Salome, Arizona exploring the Sonoran Desert.

Jim started floating rivers long before they became crowded.  He rowed a rubber raft down the Owyhee, Snake, Boise, Middle Fork and Main Salmon and Payette Rivers.  He also rowed the granddaddy of them all, the Grand Canyon of the Colorado in Arizona.  Jim loved to tell others about these trips while grinning from ear to ear.

Several Conner relatives made the trip to Oregon in the 1840’s on the Oregon Trail, including Jim’s Great, Great Grandfather who kept a diary of his trip.  An invitation to go on the Idaho Centennial Wagon Train led to what was perhaps Jim’s favorite adventure.  He began restoring horse-drawn machinery and wagons with the help of some Amish farmers and a local blacksmith.  He was selected as one of ten wagons to travel from Idaho/Wyoming boarder to Oregon City, Oregon with the Oregon Trail Sesquicentennial Wagon Train during the summer of 1993. He hauled others who wanted to experience an older way of life and took some of his best friends along as guest drivers. They met people from many states and several countries and were often filmed with the wagons and horses, Molly and Dolly for television coverage on major networks.

While Jim took part in several other wagon trains in the Western States, in 1997 relatives and friends who were Mormons encouraged Jim and Helen to go from Green River Wyoming to the Salt Lake Valley on the 150th anniversary re-enactment of the Mormon Wagon Trains and Handcart companies. They rode along in the wagon to honor their ancestors who had traveled west with those early pioneers to the Salt Lake Valley. Another memory was created for those in the wagons and also for the thousands who lined the streets, walked, rode horses and pulled handcarts going into “This is the Place State Park” in Utah.

Never idle, woodworking was another favorite hobby for Jim. In addition to building and restoring furniture, he learned to carve totem poles and bears that are treasured by family members.

Jim loved to talk to people and tell what to many sounded like tall tales about all the big Sturgeon and Salmon he caught on the Columbia River, or the 175-pound Halibut caught in Alaska that he traded for a smaller one that would be better to eat. These tales were mostly true. His adventures gave him many stories to share.

No services will be held since Jim chose to visit with as many families and friends as possible in person or by phone before he passed. He will be buried at Fairview Cemetery south of Weiser on the Oregon side not far from where his grandparents homesteaded and beside many other family members.

He was preceded in death by daughter, Diana Sandberg and brother and sister-in-law, Joe and Audra Conner.

Memorials may be made to Four Rivers Cultural Center Ontario, Oregon 676 SW 5th Ave. 97914 where one of Jim’s restored wagons is on display or to a charity of your choice. The family would like to thank Dr. David Brauer for many years of medical care and Heart and Home Hospice for their recent care.

Arrangements being made by Lienkaemper Funeral Chapel Ontario, Oregon.