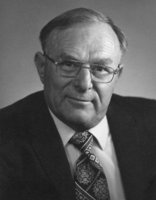 Robert Widmer, 96 years of age, passed away at his home at Brookdale Senior Living in Ontario.

Robert was born April 27, 1923 in Tillamook, Oregon, to Werner and Hattie Widmer. He attended school in Tillamook, graduating in 1942.

He met MaryAnn Fitzpatrick while going to school and they married on November 8 of that year.

He then entered the Army and was stationed in Fort Hood Texas. He was then transferred to Fort Lewis Washington where he was sergeant and supervisor of the Motor Pool there.

He was also a long time member of the Ontario City Council and Mayor of Ontario, the city he loved.

There will be no services at his request, as he wanted people to remember each other in life, not in death.

The family would like to thank Brookdale of Ontario and their staff, and Heart and Home Hospice Services, especially Abby and Sonya whom he always said, “Those two girls really know how to take care of you.”