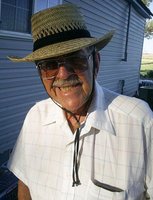 Edward Stephen Tschida, 93, of Parma, Idaho, was born in Mt. Angel, Oregon to Victor and Magdalena (Harty) Tschida. When Ed was five years old his mother died and his father placed Ed in the St. Mary’s Home for Boys in Beaverton, Oregon until he could care for Ed. Victor settled in Ontario, Oregon, and had Ed join him there five years later. During WWII Ed served in the U.S. Army and upon being discharged, married Winifred Niclain and settled in Milwaukie, Oregon. They had two children, Cecelia Anne and Edward Brendan. He started a long career with Oregon Dept. of Transportation and worked in the Milwaukie Maintenance yard until his retirement. He enjoyed helping his Uncle John and Aunt Elsie, with their small farm in Oak Grove and shared many happy hours over Elsie’s good cooking. He moved to Parma, ID after purchasing the farm of his dreams, where he has enjoyed working with the cows, moving the irrigation line, growing and harvesting crops, and taking care of his goats and cats. He is survived by his children Cecelia Tschida of Holly Hill, FL and Edward Tschida of Portland, OR and many nieces and nephews. He was the last of his nine siblings to pass. Ed’s memorial service and reception will be at his home, 1800 Echo Ave., Parma ID, on Tuesday, July 16 at 11:00 am. Services and arrangements being handled by Lienkaemper Funeral Chapel.